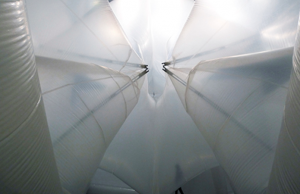 The exhibition Poured Architecture establishes a dialogue between the late Spanish architect Miguel Fisac and the contemporary work of the Basque-born, Brooklyn-based artist Sergio Prego. Through a new body of work supported by a Graham Foundation Fellowship, Prego explores the possibility and synchronicity of materials and processes across architecture and visual art in a new series of sculptures and drawings inspired by Fisac’s innovative architecture and construction techniques. Here, Prego plays with scale and texture and creates his pneumatic and concrete structures within the context of Fisac’s methodology—chiefly arquitectura vertida, the patented cast concrete system that Fisac created, known in English as poured architecture. Drawings by Prego, displayed alongside facsimiles of material culled from Fisac’s archive, further illustrate the confluence of the two practices that both employ themes of material fluidity and malleability and investigate using materials such as plastic, concrete, and aluminum. This exhibition invites a multifaceted conversation about architectural imagination, experimentation, and material expression.

Sergio Prego (b.1969) is a Basque sculptor, part of the experimental space Arteleku in San Sebastián, and now based in New York. During the five years he spent in Vito Acconci’s studio, Prego was the only artist in a group of engineers and architects who contributed to the work of the classic conceptual artist. Along with Itziar Okariz, Prego represented Spain at the 2019 Venice Biennale.

Miguel Fisac (1913–2006) was a key figure in Spanish architecture of the second half of the twentieth century and his works contributed to the modernization of architecture in Spain. He graduated from the School of Architecture of Madrid in 1942, and his first work, the Church of the Holy Spirit, was completed that same year. He was awarded the Gold Medal for Spanish Architecture (1994), the Antonio Camuñas Award (1997), and the National Architecture Award (2002).

Patxi Eguíluz is an architect, curator, researcher, and critic focused on construction and urbanism. He is an editor of books on art and architecture at Caniche Editorial and has curated several exhibitions and developed projects at various institutions across Spain. His writing has been published in MAS Context, Openhouse, and Architectural Digest (AD España).

Carlos Copertone received his PhD from the University of Extremadura, specializing in urbanism and regional planning. He is an editor of books on art and architecture at Caniche Editorial and has curated and developed several exhibitions, programs, and projects with Spanish cultural organizations. Copertone has lectured extensively in Spain and abroad and has been published in MAS Context, Openhouse, and Architectural Digest (AD España).

Iker Gil is an architect and director of MAS Studio, an architecture and urban design firm based in Chicago. He is also the editor-in-chief of the journal MAS Context and editor of the book Shanghai Transforming (ACTAR, 2008). He has curated exhibitions for the Chicago Architecture Biennial and the US Pavilion, Venice Architecture Biennale. Additionally, he is the executive director of the SOM Foundation and teaches at the School of the Art Institute of Chicago.