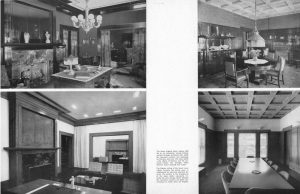 Through a newly commissioned body of work, including a large-scale textile installation, intricate embroideries, works on paper, sculptures, and a performance, Nelly Agassi conjures historical and imagined narratives from the architectural details of the Graham Foundation’s Madlener House. Built in 1901–02 for Albert F. and Elsa S. Madlener, the house was originally designed by architect Richard E. Schmidt, with designer Hugh M. G. Garden, and then renovated in the 1960s by architect Daniel Brenner to transform it into the Foundation’s headquarters. The culmination of Agassi’s 2019 Graham Foundation Fellowship, this exhibition explores erasure, preservation, identity, and architecture’s capacity to change.

The exhibition is accompanied by a program of public events, including presentations by Graham Grantees Despina Stratigakos; Allyson Vieira in conversation with Terry Kapsalis; Diane Simpson, and a performance by Nelly Agassi and Ryan Packard and Peter Maunu.

Chicago-based artist Nelly Agassi (b.1973, Israel) received her MFA from Chelsea College and her BFA from Central St. Martins, both in London. Her work has been shown internationally at institutions and galleries such as The Arts Club of Chicago, Aspect Ratio, Hyde Park Art Center, The Israel Museum, Poor Farm, Tate Modern, Tel Aviv Museum of Art, La Triennale di Milano, and Zacheta Warsaw. Agassi is a cofounder of the nonprofit organization Fieldwork Collaborative Projects and a 2019 Graham Foundation Fellow. She is represented by Dvir Gallery.

Agassi worked with Hand and Lock embroidery house in London and The Weaving Mill in Chicago to produce works in the exhibition.