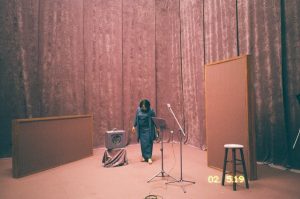 The Graham Foundation is pleased to present an immersive installation by Los Angeles-based artist, and self-described “conceptual entrepreneur,” Martine Syms.  At the center of the exhibition is Syms’ first feature length film Incense Sweaters & Ice. Through the daily life of the main protagonist—Girl, a traveling nurse—the project explores the proliferation of ways in which one’s image is captured and transmitted in public and private life—from surveillance cameras to smartphones—and the ways one moves between looking, being looked at, and remaining unseen.  The film is also a meditation on the three cities in which it is set—Los Angeles, California; St. Louis, Missouri; and Clarksdale, Mississippi—and how place lives on in its subjects, informing emotional and gestural landscapes across generations.

This exhibition is the result of Martine Syms’ selection as a 2018 Graham Foundation Fellow—a new program that provides support for the development and production of original and challenging works and the opportunity to present these projects in an exhibition at the Graham’s Madlener House galleries in Chicago. The Fellowship program extends the legacy of the Foundation’s first awards, made in 1957, and continues the tradition of support to individuals to explore innovative perspectives on spatial practices in design culture. Recent Fellows, including Syms, David Hartt, Brendan Fernandez, Torkwase Dyson and Mark Wasiuta, join alumni from the original class of Fellows, such as Pritzker Prize winning architects Balkrishna V. Doshi and Fumihiko Maki, designer Harry Bertoia, photographer Harry M. Callahan, sculptor Eduardo Chillida, experimental architect Frederick J. Kiesler, and painter Wilfredo Lam, among others.

In conjunction with the Graham Foundation exhibition, Syms’ work, SHE MAD: Laughing Gas (2016), is on view in Gallery 295 at the Art Institute of Chicago.

Martine Syms works in video, performance, and publishing. She received her BFA from the School of the Art Institute of Chicago. Her work has been shown at the Museum of Modern Art, New York; Camden Arts Centre, London; Sadie Coles HQ, London; Hammer Museum, Los Angeles; the Berlin Biennale; Manifesta, Zurich; the ICA London; Bridget Donahue, New York; the Gene Siskel Film Center, Chicago; White Flag Projects, St. Louis; the Studio Museum in Harlem, New York; the Institute of Contemporary Art, Philadelphia; and the Museum of Contemporary Art, Chicago. Her work was featured in Surround Audience, the New Museum’s 2015 Triennial. From 2007 to 2011, Syms was codirector of Golden Age, a project space in Chicago focused on printed matter; she is also the founder of Dominica, an independent publishing company dedicated to exploring blackness as a topic, reference, marker, and audience in visual culture. Syms is represented by Bridget Donahue, New York; and Sadie Coles HQ, London.