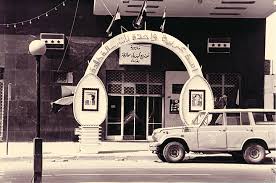 This exhibition examines the work of Iraqi architect Rifat Chadirji through the collection of his original photographs and building documents held at the Arab Image Foundation in Beirut. With the work of his architectural office, Iraq Consult, and in his other professional and intellectual roles, Chadirji became a pivotal cultural figure in Baghdad during the period of its postwar modernization from the 1950s through the 1970s. As an architect, planning consultant, and Director of Buildings for various government agencies, Chadirji was central to the organization of Baghdad and to the consolidation of its postwar image. With nearly one hundred buildings Chadirji helped foster the emergence of the factories, colleges, monopoly headquarters, communication structures, and other new building types that appear in Baghdad following Iraq’s 1958 revolution.

The exhibition includes 60 photographic paste-ups documenting Chadirji’s own building projects, as well as hundreds of his photographs shot in the streets of Baghdad from the 1960s to the early 1980s. In the first floor galleries, Chadirji’s documents are surrounded by a folio of etchings that he produced in 1984. On the second floor, Chadirji’s photographs are accompanied by those of Iraqi photographer Latif Al Ani. A contemporary of Chadirji, Al Ani chronicled newly emerging urban conditions under the shifting political regimes of the 1950s to the 1970s.

Rifat Chadirji was born in Baghdad in 1926. His father was Kamil Chadirji, the former leader of the Iraq National Democratic party. Chadirji studied architecture in London at the Hammersmith School of Arts and Crafts and returned to Iraq in 1952 to found Iraq Consult. As his practice developed, he focused on an approach to design which combined western technical advances and local vernacular forms. This governed his work through the 1970s and became the basis of his writing as an architectural theorist.

Chadirji’s practice came to a halt in 1978 when he was jailed by Ahmed Hassan Al-Bakr. Two years later, he was released by Saddam Hussein to plan modifications to Baghdad for the Conference of Nonaligned Countries. Chadirji fled Baghdad in 1983 for Harvard, where he remained for the 1980s, first as a Loeb Fellow and then as a visiting scholar. In 1986 he received the Agha Khan Chairman’s Award for lifetime achievement in architecture. Taha Street and Hammersmith, Chadirji’s first book, appeared in Arabic in 1985. Concepts and Influences: Towards A Regionalized International Architecture, 1952–1978, his first book in English, was printed in 1986. He has since published more than ten others. Recently, Chadirji has received renewed attention as an important architect whose buildings have suffered damage from the war in Iraq and as a voice of secular modernity during Iraq’s earlier period of growth. He now lives in London with his wife, Balkis Shararah.

Every Building in Baghdad: The Rifat Chadirji Archives at the Arab Image Foundation originated at the Arthur Ross Architecture Gallery at Columbia University’s Graduate School of Architecture, Planning and Preservation and was curated by Mark Wasiuta, Adam Bandler, and Florencia Alvarez.