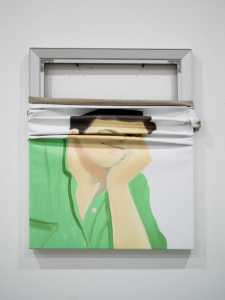 The Goss-Michael Foundation exhibition will present a newly curated selection of Jwan Yosef’s work that focuses on material and our relationship to them. Working with holy mediums such as oil paint and unholy material such as acrylic glass, the combination becomes a substitute for portraiture
“Together with works on canvas presented in an almost performative manner, I’ve chosen to focus on three separate figures: the legendary Hollywood actor Rock Hudson, the Syrian dictator Hafez Al Assad and my own father, Ahmad Yosef. Throughout my upbringing, each has brought a deeper understanding of my own personal heritage and search for identity” said Jwan Yosef.
Coming from a contradicting and somehow distant background of Syria and brought up in Sweden, along with a mixture of different religions and cultures, the works become extremely self-reflective and personal to Yosef. At the same time, his art also provides an indirect comment on a wider perception of our immediate being and surrounding cultural and political movements. 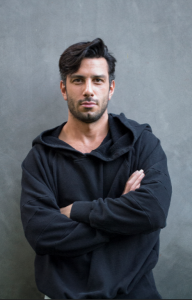 Jwan Yosef was born in Syria in 1984 to a Kurdish/Armenian family. When his family immigrated to Sweden, he studied painting at the Pernby School of Painting in Stockholm between 2004 and 2006. He transferred to Konstfack University College of Arts, Crafts and Design in Stockholm, where he graduated with a BA in Fine Arts in 2009. He earned his MA in Fine Arts from Central Saint Martins in London in 2011.
In 2013, Yosef held two solo exhibitions titled “Painting about Sex, Flesh and Violence, lol” at the DIVUS Gallery in London and “High Notes” at the Galleri Anna Thulin in Stockholm. That same year, he took part in the Threadneedle Prize and was awarded the BEERS Contemporary Award Emerging Art. Yosef is also a founding member of the not-for-profit art studio The Bomb Factory Art Foundation in Archway, North London.
“I was introduced to Jwan Yosef’s work when he generously donated to MTV RE:DEFINE event we host annually in Dallas. After meeting him and learning about his technique and messages, Jwan and I scheduled this upcoming solo exhibition at The Goss-Michael Foundation,” said Kenny Goss, co-founder, The Goss-Michael Foundation.