Glucksman: Josef and Anni Albers: Voyage inside a blind experience 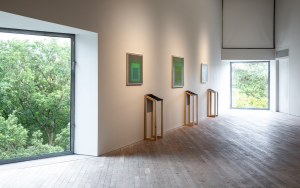 Is it possible to experience abstract artworks without using your eyes? How can a visual art exhibition be experienced by people who are partially sighted or blind? Josef and Anni Albers: Voyage inside a blind experience considers these questions by presenting key works from the artists alongside tactile models, braille texts, and playful art encounters led by touch.

The works on display include Anni Albers’ hugely influential textile works, Josef Albers’ renowned Homage to the Square paintings, and a selection of his record cover designs accompanied by the original jazz music. The show also includes a darkroom where visitors are invited to explore objects by touch, as well as a section that reflects on the importance of Albers’ teaching that emphasised a sense of feeling as well as seeing art.

Josef Albers was first a pupil and then teacher at the Bauhaus, the German design school founded by Walter Gropius in 1919. He subsequently repeated his teaching experience in the American Black Mountain College and at Yale University, and the exhibition features diverse types of exercises and studies which the artist carried out with his students. During his time teaching in America, Josef and his students began experimenting with studies of the relationships between colours using assemblages of coloured paper and collages of dried leaves. Colour, for both Josef and Anni Albers, was an important field of research. The influence between colours affected the forms and their interaction in the space.

The exhibition presents a selection of the works of Josef Albers, entitled Homages to the Square. Josef produced hundreds of variations on the basic compositional scheme of three or four squares set inside each other. These paintings and prints, as well as two original Unfinished Homages to the Square, reveal the considerable thought that he gave to the interaction between different colour combinations.

Anni Albers came from a wealthy family but, unable to adhere to the expectations of this world, she became a student at the Bauhaus. Her creations celebrate the physical elements of her medium, drawing beauty from the threads and knots intertwined with unusual materials. She spent the rest of her life in search of new ways to do things and her seminal text On Weaving was published in 1965. The Glucksman is proud to present a wide selection of her textiles, prints and drawings that demonstrate her deep commitment to experimentation with form across materials.

Josef and Anni Albers: Voyage inside a blind experience also presents a selection of works that relate to the ongoing relationship the artists had with Latin America. Between 1935 and 1936, the Albers travelled for the first time to Latin America. They returned to visit archaeological sites, to collect findings, and built up a vast collection of artefacts. The typical step-pyramid constructions, the maps of ancient sites, as well as the façades of buildings and ornamental patterns of Andean fabrics, are echoed in the works on display.

Developed in partnership with the Josef and Anni Albers Foundation and Atlante Servizi Culturali, along with the expertise of l’Istituto dei Ciechi di Milano, a leading institute for people who are visually impaired in Milan, Italy, the exhibition is supported by the Arts Council of Ireland and the Creative Europe Programme of the European Union. Following its presentation at the Glucksman, the exhibition is touring to the Museum of Contemporary Art, Zagreb, Croatia.

The Glucksman also presents Please Touch: Tactile encounters, a parallel exhibition of works by Irish artists Rhona Byrne, Maud Cotter, Richard Forrest, and Katie Watchorn, whose individual practices often emphasise texture and tangibility. Audiences are invited to feel the textures of the artwork. From intricate geometrical shapes to skin-like resin surfaces, assemblages of diverse materials to artworks you can wear, Please Touch emphasises the value of an embodied encounter with visual art.