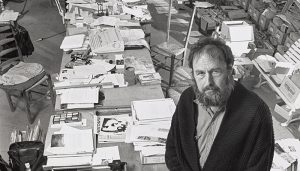 One of the most distinguished advocates of conceptual art and postminimalism, and a figure who became synonymous with the advent of globalism in contemporary art, Harald Szeemann (Swiss, 1933–2005) developed a new form of exhibition-making that centered on close collaborations with artists and a sweeping international vision of contemporary culture. Szeemann’s exhibitions covered vast areas of research, challenging traditional narratives of art history and often embracing creative fields outside the visual arts. For each of his more than 150 installations and exhibitions, Szeemann added materials to his vast library and research archive, which he referred to as the “Museum of Obsessions.” His museum comprised not only the physical place of the archive but also a mental landscape that encompassed all moments of genius and artistic intensity treated in Szeemann’s exhibitions, both realized and unrealized, past and future.

This exhibition is divided into thematic sections. “Avant-Gardes” addresses Szeemann’s early exhibitions and his engagement with the artistic vanguards of the 1960s and early 1970s. “Utopias and Visionaries” explores a trilogy of exhibitions Szeemann organized in the 1970s and 1980s that rewrote the narrative of early 20th-century modernism as a story of alternative political movements, mystical worldviews, and utopian ideologies. “Geographies” examines Szeemann’s own Swiss identity, his penchant for travel, and his focus on broad international exhibitions and regional presentations later in his career.