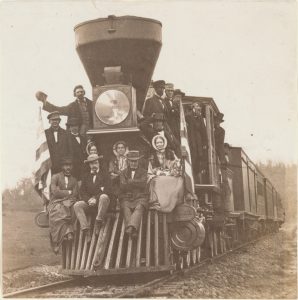 The early history of paper photography in the United States is a formative but rarely studied aspect of the medium’s evolution. While Americans were at first slow to adopt Europe’s negative-positive photographic practices, the country’s territorial expansion and Civil War increased demand for images that were easy to reproduce and distribute. The exhibition Paper Promises: Early American Photography, on view February 27 – May 27, 2018 at the J. Paul Getty Museum, Getty Center, features rare 19th-century paper negatives and paper photographs from this important era of American experimentation, including portraits of some of the country’s most notable political and cultural figures, as well as searing images from the Civil War.

“In the mid-nineteenth century, photographs did much more than merely document the development of the nation; increasingly they became central to debates about the U.S. and its place in the world,” explains Timothy Potts, director of the J. Paul Getty Museum. “The photographs on view in this exhibition offer a rare insight into the forces and movements that shaped the country’s character at a formative stage of its development.”

Photographic Pioneers
Today, Facebook, Instagram, and Snapchat create a thirst for casual selfies, views of our surroundings, and documentation of the most mundane aspects of daily life. Yet reproducible photography was not initially popular in the United States. In the earliest years of the medium Europeans quickly adopted techniques that enabled multiple photographs to be printed from negatives, but Americans initially preferred singular formats intended for intimate viewing, such as those produced directly on metal or glass.

To secure the widest possible market for photographs that could be printed in multiple, entrepreneurial photographers made salted paper prints for a variety of purposes: scientific investigation, celebrity portraiture, tourism, historic preservation, corporate and self-promotion, and firsthand documentation of newsworthy events. Their ambition to develop a technique suited to the quickened pace of modern life is apparent in a salted paper print made around 1860 by an unknown photographer, in which a group of men and women gather excitedly aboard the front of a train. The railroad was a potent symbol of progress, and it was anticipated that photography, like locomotives, might connect Americans to places and people far away.

In the 1850s, however, alarmist reports that photographic negatives were being used to counterfeit currency caused widespread anxiety. At the time, banks printed their own money and thousands of different paper bills were in circulation. Around forty percent of the bills that passed through American hands were counterfeit, so banknotes began to be thought of as little more than flimsy “paper promises.” The exhibition features photographic counterfeits from the era, revealing a previously unstudied aspect of initial American resistance to photographic reproducibility. Though “paper promises” was originally a derisive phrase, the promise of paper photography soon swept the nation.

Also included in the exhibition are examples of other pioneering photographic techniques, including daguerreotypes, ambrotypes, albumen silver prints, a pannotype, and an ivorytype.

As the use of negatives to produce photographs in multiple sizes and shapes began to catch on, photography studios rushed to secure famous sitters in the hope of gaining wide distribution for popular images. The exhibition demonstrates how celebrities of the era grew savvy about circulating carefully crafted images of themselves. For example, an 1860 portrait of abolitionist Frederick Douglass by an unknown photographer emphasizes the gravitas of the fiery orator and prolific writer. Douglass sat for portraits throughout his life, countering racialized stereotypes by circulating dignified images of himself.

Family photographs also became increasingly cherished as the medium gained in popularity. At a time when life expectancy was short and child mortality common, photographic portraits were thought of as especially precious souvenirs. The exhibition features several intimate portraits of families and children, some of which were carefully hand-tinted to further strengthen the sense of personal connection.

Universities capitalized on the ability to produce images in multiple and compiled volumes of students and staff into what is today the familiar yearbook format. An example from about 1852 by John Adams Whipple (American, 1822-1891) was commissioned by Harvard – a proto-Facebook more than 150 years before Mark Zuckerberg’s start.

The West and the War

As disputes over state and federal sovereignty as well as American Indian rights intensified, photographers sought how best to portray the people and places most frequently in the news. Photographs of several treaty negotiations will be on view, such as images of the first Japanese delegation to the United States, and an 1858 portrait by Alexander Gardner (American, born Scotland, 1821-1882) of a delegation of Upper Sioux who traveled to Washington, D.C., for treaty talks.  While most of the delegates pictured wore contemporary clothing, Gardner kept costumes on hand to outfit visitors in “traditional” attire, in keeping with East Coast ideas about Native dress. Photographs of American Indian sitters proliferated as their autonomy became a highly contested matter of public debate.

In the territorial struggles of the 1860s, families torn apart by the Civil War sought personal mementos that could be easily shared and saved, and paper photographs served that purpose well. Soldiers had their portraits made upon enlistment, and civilians clamored for images of the battlefield. Images of slaves and of Abraham Lincoln were increasingly wielded as tools for political change, and the exhibition will spotlight several examples. Freedom’s Banner. Charley, A Slave Boy from New Orleans (1864) by Charles Paxson (American, died 1880) is one of many small-scale images carefully composed and widely circulated to encourage empathy with the plight of enslaved families. The photographs were sold to support education for freed slaves and to sustain support of the abolitionist cause.

“As we struggle to adapt to today’s digital revolution, with its capacity for unchecked manipulation and proliferation of images, it’s valuable to look to an earlier era in which ideas about photography and its role in society were similarly exerting profound effects,” says Mazie Harris, assistant curator of photographs at the J. Paul Getty Museum and curator of the exhibition. “Because early paper photographs became an integral part of everyday life, not many survive. So this is a unique opportunity to see rare images from a tumultuous period of American history.”

. The exhibition is curated by Mazie Harris, assistant curator of photographs at the J. Paul Getty Museum. A book of the same name and authored by Dr. Harris, with contributions from scholars of American history and photography, will be released by Getty Publications in February 2018.