Garage: “If our soup can could speak: Mikhail Lifshitz and the Soviet Sixties” 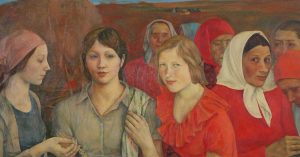 This exhibition celebrates the fiftieth anniversary of the scandalous publication of The Crisis of Ugliness by Soviet philosopher and art critic Mikhail Lifshitz.

The book, which first appeared in 1968, was an anthology of polemical texts against Cubism and Pop Art—and one of the only intelligent discussions of modernism’s social context and overall logic available in the Soviet Union—making it popular even among those who disagreed with Lifshitz’s conclusions.

The result of a three-year Garage Field Research project, If our soup can could speak takes as its starting point Lifshitz’s book and related writings to re-explore the vexed relations between so-called progressive art and politics in the twentieth and twenty-first centuries, as well as the motivations and implications of Lifshitz’s singular crusade against the modern classics. His appraisal of the crisis in twentieth-century art differs fundamentally from the standard attacks on modernism in government-issue Soviet art criticism, and in fact can be read as their direct critique. All the while, Lifshitz is in constant dialogue and debate with the century’s leading intellectuals in the West (Heidegger, Benjamin, Adorno, Horckheimer, Levi-Strauss, and others), searching for answers to the questions they posed from the perspective of someone with a unique inner experience of the Stalinist epoch’s revolutionary tragedy.

The exhibition unfolds as a narrative of archival documents, art works, and text fragments, which are situated in a sequence of ten interiors that could be seen as spatial forms for landmark moments in the evolution of modernism, or in Lifshitz’s thinking. It intends to provoke a discussion of art after the triumph of modernism and its contradictory position in a crisis-ridden world where Lifshitz’s radical diagnoses seem more relevant than ever.Initiated by artist-curators David Riff and Dmitry Gutov, the initial Field Research project (through which the exhibition was developed) involved a combination of archival mining, translation, and public discussions of the controversial themes and dramatic historical contexts of Lifshitz’s work. Since November 2015, the research team has reviewed more than 200 folders of documents from public archives, such as the Russian State Archive of Literature and Arts, the Central Archive of Sociopolitical History of Moscow, and the State Tretyakov Gallery, as well as the private archives of Lifshitz’s daughter, Anna Pichikyan, and others. Retrieved documents include unpublished questionnaires, records of political purges, correspondence, manuscripts, stenographs of Lifshitz’s lectures, personal photographs. These more conventional research methods were complemented by a large-scale visual study—both online and offline—delving into the references and sources of Lifshitz’s work and its institutional and everyday contexts, as seen in pictures and films.