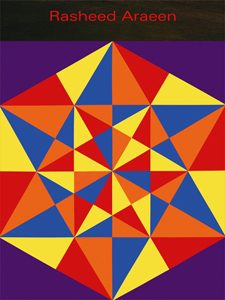 The first solo exhibition in Russia of Rasheed Araeen (b. 1935, Karachi, Pakistan) is presenting six decades of work by the seminal practitioner who has had a profound influence on generations of artists, writers, and thinkers around the world.

Known for his strident critique of the ideological and political assumptions of Western modernism, Araeen trained as an engineer in Karachi, before moving to London in 1964 in pursuit of an artistic career. There, he first became known as a pioneering sculptor and installation artist in the (then) emerging field of minimalism, receiving the prestigious John Moores Prize for sculpture in 1969.

Against the tumultuous background of financial crisis and increasing hostility to immigrants in the 1970s, Araeen’s art took a sharp political turn, addressing head-on the problems of Britain’s institutional racism both outside and within the art world. He began writing extensively in 1975, and in 1977 presented a multimedia work, Paki Bastard, that conflated performance, film, and sound. A year later, he initiated Black Phoenix, a publication on Black art in Britain, and started using Urdu—his native language—as part of his work addressing decolonization and the complex identity of a Commonwealth artist.

In the 1980s Araeen established his first institutional structures, Project MRB (1982), Kala Press, and Black Umbrella (1984) which defined itself as the Afro-Asian Peoples’ Visual Arts Resource & Information Centre. Primarily self-funded, this is the name under which Araeen has since developed his expanded practice, including the ground-breaking journal, Third Text, which he established in 1987. The artist also began curating in the 1980s, most notably The Other Story (1989) at the Hayward Gallery, with 24 British African, Caribbean, and Asian artists. In this exhibition, Araeen articulated a sentiment that he has been championing his entire career: that until Black artists are written into the canon of art history on the basis of their contribution to modernism, there is no common ground from which to tell—or analyze—the story of postwar art.

A Retrospective is the first comprehensive survey of Areen’s work, revealing the scope of the artist’s expanded artistic practice, from his early experiments in painting in Karachi and groundbreaking minimalist sculptures in London, to key political pieces from the 1970s and 1980s—including his pioneering writing, editorial, and curatorial projects—as well as a selection of his new geometric paintings and wall structures.

Especially for Garage, Araeen will develop an Atrium Commission, producing a sculpture he first envisaged in 1968. In a gesture that puts the artist in dialogue with the glorious and troubled history of the Russian avant-garde, Homage to Tatlin directly references Vladimir Tatlin’s Monument to the 3rd International, suggesting a kinship of non-Western modernities.

In parallel with the exhibition, Garage is producing a compendium of Araeen’s texts, which will be available in Russian for the first time. Overseen by the artist, the selection spans several decades of polemic writing and includes key works, such as “Preliminary Notes for a Black Manifesto” (1975–1976) and “Ecoaesthetics: A Manifesto for the Twenty-First Century” (2008–2010).

As part of the exhibition Rasheed Araeen. A Retrospective, the project A Cultural Atlas by the artist and researcher Vali Mahlouji will be shown on the Museum’s mezzanine. A panorama of the intellectual history of the twentieth century, it reflects artistic, political, ethical, and spiritual processes in the countries of the Global South and how those processes are intricately connected to the culture of the Western world, at times outstripping it or defining its development.

Rasheed Araeen: A Retrospective was first developed for Van Abbemuseum, Eindhoven, and curated by Nick Aikens. Prior to Garage, the show travelled to MAMCO, Geneva, and Baltic Centre for Contemporary Arts, Gateshead.

At Garage, A Retrospective is curated by Nick Aikens (Van Abbemuseum) in collaboration with Kate Fowle, Iaroslav Volovod, and Valentin Diaconov.

Rasheed Araeen (b. 1935, Karachi, Pakistan) is a sculptor, painter, installation and video artist, political activist, and publisher. He studied to be an engineer in Pakistan, but in the 1960s moved to London, where he became one of the key minimalist artists of his generation. Having experienced racism in the British art world, in the mid-1970s he produced a series of political videos and performances and founded and became the editor of the journal Black Phoenix. In 1987, he founded the journal Third Text, devoted to the art of “third world” practitioners, postcolonial issues, multiculturalism, and identity politics. In 1989, Araeen curated The Other Story, an exhibition of European-based artists who came from former British colonies. The mid-2010s saw a new wave of interest in his art: in 2017 he took part in the Venice Biennale and Documenta 14 (Athens/Kassel) and had his first major retrospective exhibition, which spanned his career from Karachi-era drawings to recent paintings and sculpture, at Van Abbemuseum (Eindhoven, Netherlands). He lives and works in London.