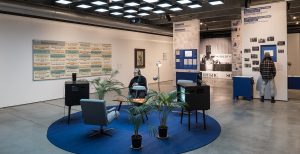 In the midst of a very snowy Moscow winter this exposition has opened at Garage, exploring the ramifications of introducing the art market to a communist society. Through archival materials and recent interviews with participating artists and organizers of the sale, the exhibition tells the story of one of the most controversial art events of the late-Soviet era. It also features seven original lots from the 1988 sale, including Clown, Circus Scene (1935) by Alexander Rodchenko, Fabric Design (1924) by Varvara Stepanova, Fundamental Lexicon (1986) by Grisha Brushkin—which was the highest-selling contemporary work—and Ilya Kabakov’s All About Him (1971), bought by Sotheby’s chairman Alfred Taubman and presented to the USSR Ministry of Culture as the founding artwork for a future museum of contemporary art.

On July 7, 1988 Sotheby’s held an auction titled Russian Avant-Garde and Soviet Contemporary Art at Sovincentr in Moscow. It was the first international art auction ever to take place in the Soviet Union. Initiated by auctioneer, Simon de Pury, more than one hundred lots of early twentieth-century avant-garde and Soviet contemporary works were made available. Conducted in pounds sterling, the auction was intended for international collectors who were flown in especially for the event, watched over by incredulous local artists and intelligentsia, who were not permitted to have foreign currency under the legislation of the time. Telling the story via the artists and organizers of the event (who have been interviewed over the past year), the exhibition reveals the contradictory perspectives on the auction that still remain today.