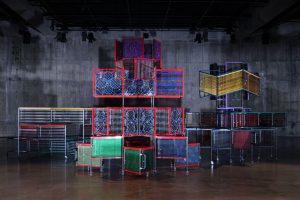 Tightrope Walking and Its Wordless Shadow, which marks Yang’s first institutional solo show in Italy, will explore the vast array of media employed by the artist, ranging from paper collage, video essays, and performative sculptures to large-scale installations. Yang’s spectrum of allusions and visions flows walks on thin line between social inquiry and history, personal life and collective memory, yielding imagery and experiences of enormous evocative power, in which objects, figures, and places are inextricably linked.

Tightrope Walking and Its Wordless Shadow unfolds through three rooms where landmark works are combined with ambitious new commissions to highlight recurring themes in the artist’s career: abstraction and geometry, movement and performativity, and the interlocked dynamics of folding and unfolding. Yang explores all of these as interwoven entities in a selection of pieces that represent key stages in her oeuvre, from 2000 up to her most recent works. It also points to her deep engagement with the unspoken: the urge to create a language whose potentiality is like a tightrope walk, where each move is powerfully dynamic and charged with both emotional and perceptual tension.

Ushering us into the show, the first room introduces two subtle and sensitive installations: Thread Installation, 134.9 m³ (2000-2018) and Chalk Line Drawing, 81 m² (2002-2018). Though rarely shown, these series are regarded as seminal.
Locked within the space marked off by these two installations is another of the artist’s early works, Science of Communication #1 – A Study on How to Make Myself Understood (2000), addressing the artist’s lasting concerns and struggle with language in the sphere of cultural and social integration.

In contrast to the first room, the large-scale installation Cittadella (2011) is an intense presence that spectacularly transforms the main space. Made up of 176 venetian blinds, Cittadella creates a multisensory environment of intricate modular structures, which is penetrated by physically walking into it, and by the hypnotizing movement of six robotic lights.

After this evocative, immersive, dim environment comes a large, bright, open space that feels like a ballroom, its walls ornamented by a mural-like piece from the ever-evolving graphic series Trustworthies (ongoing since 2010). In the artist’s major work cycle, Yang combines different graphic materials, such as patterned envelopes, her own custom-printed graph paper (Grid Blocs, ongoing since 2000), motifs of technical devices and natural imagery, as well as reflective vinyl film.

The fanciful figures and narratives that unfold across the walls serve as a backdrop for the “dance” of two newly conceived performative sculptures from the Dress Vehicles series (ongoing since 2011). As hybrids that blend architecture, sculpture, and performance, Sonic Dress Vehicles seem to sum up the multifaceted nature of Yang’s oeuvre that is so evident in this exhibition.

From the minimalist approach of the first room to the lush exuberance of the last, the exhibition reflects the different extremes that are touched by Yang’s ongoing process of experimentation, where chance encounters with an object or material are prone to generate unexpected forms, emotions, and narratives, and where the rejection of entrenched ideas always opens up new perspectives.

A fully illustrated anthology will be published in conjunction with the exhibition. It will include the most significant essays and interviews on the artist’s work from 2006 to 2018, and will feature a large selection of images of landmark pieces and works on display.
The book, edited by Bruna Roccasalva, is published by Skira in bilingual edition (English/Italian).