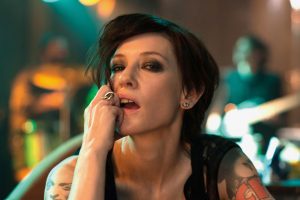 The German artist Julian Rosefeldt (1965, Munich) is internationally recognized for his meticulously choreographed films. Inspired by Art History, film and popular culture, Rosefeldt creates stunning multi-screen installations in which the characters fight in the theater of the world.  His installation ‘Manifesto’ consists of 13 synchronized films starring Cate Blanchett who performs different roles guided by a selection of fragments of more than 50 manifestos of the 20th century Art history.

As a result, we get a polyphonic ouvre that draws on more than 50 historical texts. Breton, Tzara, Marinetti, Malevich, Claes Oldenburg, Sol Lewitt, Yvonne Rainer and Marx/Engels, amongst others, inspire Blanchett to create astounding characters that range form a corporate CEO to a tattoed punk to a homeless man, each reciting surprising and provocative monologues from the thoughts of Dadaists, Futurists, Situationists, architects and film directors.

The work pays tribute to the literary beauty of the manifesto genre and stands as a lucid approach to the importance of the historical texts in our Contemporary world.

“In MANIFESTO, Julian Rosefeldt not only examines the concerns and intentions that are so compelling and urgent they must be expressed in the form of a manifesto; he is also interested in the specific rhetoric of manifestos and how they create a ‘call to action.’ This leads him to ask: what do we do by saying something?”
(Anna-Catharina Gebbers and Udo Kittelmann)

In collaboration with the Goethe Institut.