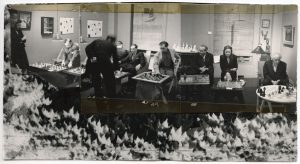 Duchamp, Chess and the Avant-Garde, an exhibition that revisits the history of modern art through the lens of its relationship to chess.

Taking Marcel Duchamp’s life as its timeframe, the show looks at chess as a leitmotif that runs through the avant-garde, thus offering innovative insights into the history of 20th century art.

The exhibition brings together around 80 works from 1910 to 1972, including paintings and sculptures drawn from major public and private collections in Europe, the Americas, and the Middle East. The selection includes four of Duchamp’s readymades and a dozen historical chess sets, designed by leading avant-garde and conceptual artists. The show also features a wide range of original documents including photographs, films, and audio recordings that illustrate the role of chess in the move from the avant-garde to conceptual art.

The exhibition is structured around six sections. The first, entitled From Family Leisure to the Painting as Idea, begins with chess as a recurrent motif in post-impressionist domestic scenes and ends with Duchamp’s invention of the readymade, by way of Cubism. Highlights include Duchamp’s La Partie d’échecs, from the Philadelphia Museum of Art, and his readymade Trébuchet, from The Israel Museum Collections, as well as works by Raymond Duchamp-Villon, Jean Metzinger, and Jean Crotti.

The second section, Chess and Art for the People, looks at chess as a crucial educational device in Russian Constructivism, and at the way the game took on a renewed, abstract dimension in the teachings of the Bauhaus. This room contains three outstanding paintings: Paul Klee’s Überschach, from the Kunsthaus Zürich, Sonia Delaunay’s Les Robes simultanées (Trois femmes, formes et couleurs), from the Museo Thyssen-Bornemisza in Madrid, and Wassily Kandinsky’s Durchgehender Strich, from the Kunstsammlung Nordrhein-Westfalen in Düsseldorf.

The third section, The Psychoanalytic Space of the Chessboard, focuses on the complex network of connections woven between Duchamp and the Surrealists, while also examining how Surrealist women artists approached the chessboard through the filter of gender-related concerns.

The following section, The Game of War, presents chess as a means of social engineering during the hostilities that shook Europe in the 1930s and 40s. It also shows how émigrés spread chess culture among the international avant-garde. Maria Helena Vieira da Silva’s painting The Chess Game stands out in this room, courtesy of the collections of the Centre Pompidou.

Duchamp was instrumental in popularizing the game of chess in the New York art scene during the 40s, as seen in The Imagery of Chess, a gallery show organised by Julien Levy, Max Ernst and Duchamp himself in 1944. An entire section of the exhibition is dedicated to this show and brings together chess sets designed for the occasion by Ernst, Alexander Calder, Man Ray and Isamu Noguchi.

Similarly, and possibly due to Duchamp’s lasting influence, younger artists were also drawn to chess including members of Pop Art and Fluxus circles. The final section of the exhibition, Chess in the Origins of Conceptual Art, comprises a selection of Duchamp-inspired works by conceptual artists such as Takako Saito, George Maciunas, Robert Filliou and Yoko Ono.