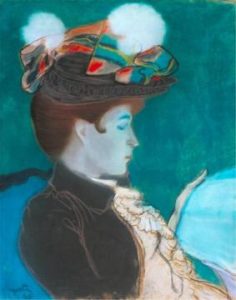 The 18th century has always been considered as the golden age of the employment of the pastel technique, but it was only in the 19th century that the pastel slowly managed to gain its independence from other techniques such as oil painting. The material’s qualities (intense colors, soft tones, ease-of-use and handling) perfectly chimed with a certain notion of modernity which was taking root at that time.

This exhibition delves deeper into the history of the revival of the pastel from an international perspective and underscores its main episodes and most famed proponents, who transformed this technique into an art form in its own right. Eugène Boudin, Odilon Redon and Edgar Degas can be found among the artists who popularized this technique and managed to confer an innovative status on the pastel crayon. Pastels continued to be used during the first half of the 20th century and were applied to the break from the old artistic languages ushered in by the previous generation, by, among others, Pablo Picasso, Joan Miró, María Blanchard and Theo van Doesburg.