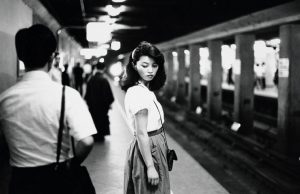 Ed van der Elsken (Amsterdam, 1925 – Edam, 1990) was a photographer who dedicated a lot of his work to the streets in different cities all over the world, from his hometown Amsterdam to Paris or Tokyo, seeking what he called “his” people, authentic, genuine people with whom he could identify in many cases. For him photography was a means through which he could experiment with and externalise his own life, which is why his personality is reflected in the relationships with the people he photographed and in his numerous self-portraits. The modernity and visual authenticity of his images are in agreement with his adventurous spirit, and at the same time, the non-conformist lifestyle of the people whose everyday lives he shared.

This exhibition shows a new outlook on his work and the different sides of him as a photographer, film-maker and writer. In addition to a large number of photographs, the exhibits also include models of his publications, contact sheets and sketches that enable us to better understand his working methods. Likewise, the fragments taken from his films, in black and white and in colour, highlight his work as a film-maker and help us understand the close relationship between film-making and photography by Van der Elsken.