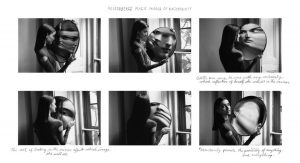 The foundation is presenting the most complete retrospective exhibit up to this day dedicated to the American photographer Duane Michals (McKeesport, Pennsylvania, 1932).

There are few artists in the history of photography who have managed to have their work and their life converge. Duane Michals has this great distinction: his thoughts, preoccupations, dreams and opinions are an integral part of his photographs, which he largely creates as a form of self-expression. Michals posits a new approach to photography, one that seeks not to document tangible reality but to deal with the metaphysical aspects of life. In so doing he departs from photography as an instrument of visual memory: what cannot be seen, that which remains hidden, becomes the main objective of his search.

Duane Michals is one of the contemporary photographers to have most profoundly rethought the language of photography. An artist who maintains a perfect equilibrium between photography and poetry, from its outset Michals’ work has moved in territories little understood by the photography establishment. In the 1960s he began working with sequences consisting of a number of carefully constructed photographs. With these he managed to go beyond the limits of the individual image, which he took to be inadequate for expressing his inner world. Following this, Michals began to write short texts on the surface of his prints, which provided a counterpart or a context for the images, thus refuting the idea that a photograph is worth a thousand words.

At the age of 85, Duane Michals is still creating, inventing forms and new resources. This exhibition includes examples from his latest series, which include images in the shape of a fan inspired by the popular Japanese tradition of ukiyo-e, tintypes painted in oil and short films in which he depicts many of his formal inventions and addresses themes like human relationships, the lack of communication and political criticism.