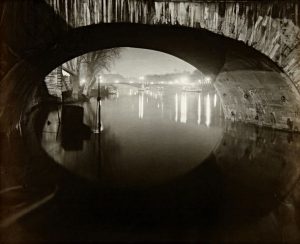 Brassaï was one of the most prominent members of the group of European and American photographers whose work between the two world wars redefined photography’s identity and enriched its potential as a means of artistic expression.

Brassaï (the pseudonym of Gyula Halász, 1899-1984) first explored the traditional visual arts and literature as he moved from his native Brasoc in the Transylvania region, part of the Austro-Hungarian Empire, to Budapest and Berlin, eventually settling in Paris in 1924. There he earned a living from sporadic journalistic work which generally involved providing photos, at first other people’s, but soon afterwards his own.

Brassaï began as a serious photographer in 1929 and was intensely active throughout the 1930s. His main subject was the city of Paris: its physical material, its everyday life and especially the way it looked and its vitality by night. Artistic photography was considered marginal, but it was growing enormously as a means of illustration, both in the new illustrated magazines as well as books and other publications. It was against this background that Brassaï’s book, Paris de Nuit, appeared in 1932, earning him immediate popular recognition. It was a topic that appealed as much to the cultural elite as to the tourist industry, which was aware of and receptive to these types of image. This duplicity also was indicative of the special interest Brassaï displayed in the nocturnal worlds of popular entertainment, crime and prostitution.

The overlap between the work of Brassaï as an artist and the photographs he was commissioned to take or those he intended to have published gives rise to a wide and complex range of work. Some exhibitions and publications have attempted to offer an integrated overview of his subject matter or a global account of his career. More than anything else, this current exhibition tries to concentrate on Brassaï’s achievements as an artist, through a collection in which excellent vintage copies of his best pictures are displayed. The show has been made possible thanks to the enthusiastic and generous collaboration of those who represent the artist’s estate in Paris (Estate Brassaï Succession), as well as the relevant museum collections in France and the United States. Eleven themed groupings (plus a selection of original copies of the avant-garde magazine Minotaure) trace Brassaï’s career and at the same time highlight his renowned work in Paris during the decade of the thirties.

After it passes through Barcelona the exhibition will first move on to the Fundación MAPFRE Recoletos Exhibition Hall in Madrid (from 31 May until 2 September 2018) and from there to the San Francisco Museum of Modern Art (SFMoMA) from 17 November to 17 February 2019.

The current show traces his career using over two hundred examples of his work. Curated by Peter Galassi, chief curator of the Photography Department of The Museum of Modern Art (MoMA) in New York between 1991 and 2011, this represents the first retrospective exhibition of Brassaï organized since the year 2000 (Centre Pompidou) and the first in Spain since 1993.

It benefits from an exceptional loan from the Estate Brassaï Succession (Paris) and other loans from some of the leading institutions and private collections of North America and Europe: Museum of Modern Art (New York), Centre Pompidou (Paris), Museum of Fine Arts (Houston), Metropolitan Museum of Art (New York), Art Institute of Chicago, Nicholas and Susan Pritzker, David Dechman and Michel Mercure, Philadelphia Museum of Art, ISelf Collection (London) and San Francisco Museum of Modern Art.

Brassaï is a Fundación MAPFRE production.