Fundación MAPFRE: “Boldini and Spanish Painting at the End of the 19th Century. The Spirit of an Era.” 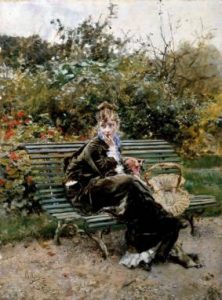 Giovanni Boldini was one of the most important portrait painters from the turn of the century. After moving to Paris in 1871 he was considered one of the foremost painters of Montmarte. Despite the fact that the majority of the work he produced occurred around the same time as the birth of impressionism, this movement did not affect his way of painting and he kept himself apart from it and sought to innovate in other ways. Influenced by Meissioner and Fortuny on his arrival in the French capital, Boldini preserves his unique style throughout his life, based on his intuition of a moment and of movement, reflected in his swift brushstrokes yet never losing sight of the figure and expression of the person portrayed, lending them unusual positions and attitudes that signalled a turning point in this thousand-year old genre.

This exhibition focuses, for the first time, on this artist’s painting in dialogue with that of other Spanish painters who were part of the Paris of the Belle Epoque, such as Raimundo de Madrazo, Joaquín Sorolla, Rogelio de Egusquiza, Martín Rico and Francesc Masriera.