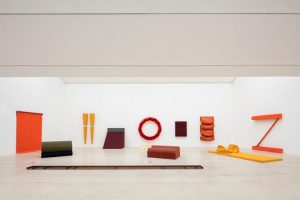 The work of Franz Erhard Walther (Fulda, Germany, 1939) addresses a series of complex issues at the center of the ruptures and shifts that took place in the 1960s and 1970s. This was a time in which new forms of artistic production emerged that radically broke with art-historical categories and conventions.

The exhibition Franz Erhard Walther. Objects, to use. Instruments for processes is the first comprehensive survey in Mexico and Latin America of Walther’s oeuvre, spanning a career of six decades. It presents a significant selection from his major bodies of work, exploring dominant themes in Walther’s practice; from the idea of action as a central working concept to the relationality between object, spectator and space that is the hallmark of his production.

At the center of the exhibition is Walther’s seminal 1. Werksatz (First Work Set] (1963-1969), which can be considered the conceptual, operative and material matrix from which his subsequent production unfolds. Possibly one of the most radical works produced in the 1960s, the First Work Set destabilized traditional notions of sculpture, redefined the object as well as its relation to the gallery space and the spectator, and like many practices of the 1960s, also proposed linguistic and discursive functions for photography.

Different works in the exhibition make manifest the ideas at the core of his practice as an artist, and underscore his various interests in language, communication, process, space, scale, and the active role of the spectator. Extending across different media and supports-drawing, collage, sewn objects, video, and photographs–Walther’s production exemplifies the crossovers between these mediums that took place in the art of the 1960s.

These works demand not only a complete rethinking of the object but at the same time a reconsideration of the body, as one that thinks, and decides.