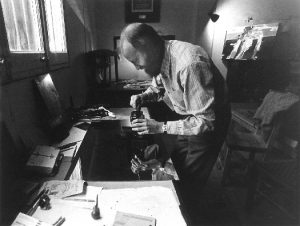 The exhibition brings together the corpus of the artist’s graphic production, some fifty works compiled in five handcrafted folders whose names allude to dark periods of the past and most of which are made using both chalcographic and serigraphic techniques: “Mutilados de paz” (1965); “Auto de fe” (1967); “Antropofauna” (1970); “Torquemada” (1970) and “Descubrimientos Millares 1671” (1971). You will also be able to see several original posters, from the first published by Buchholz on the occasion of his exhibition in Munich in 1968, the reproduction of a collage of Millares (poster of the Cuenca museum) and the poster of his last exhibition at the Musée d’Art Moderne in Paris (1971), along with some of the terracotta painters that form part of the archaeology collection of the Canary Museum and that so influenced the work of an artist who, throughout his intense trajectory, showed a fascination and great interest in engraving and graphic techniques in general and whose mark was reflected in his personal universe. The exhibition closes with a set of five graphic essays made in his studio, recently located in his archives, and eight posthumous engravings, with some variants, printed in the Madrid workshop of “Mayor 28”.

The exhibition can be visited at the Museo de Arte Abstracto Español de Cuenca – to which it was so closely linked – from 16 January 2020 and will conclude its tour at the Museu Fundación Juan March in Palma in June 2020.