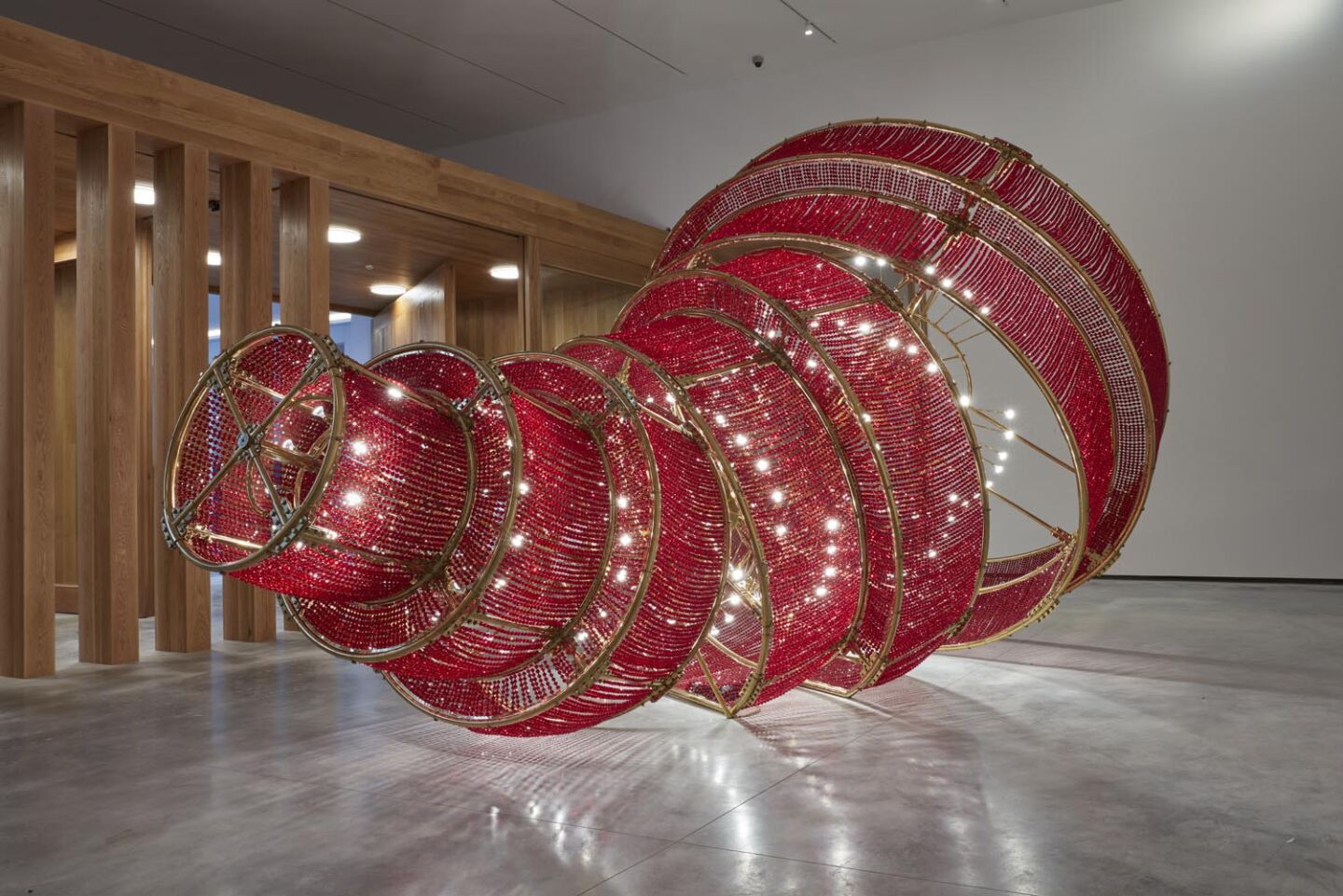 The opening exhibition that will be hosted in the new building reveals the character of the Helga de Alvear Collection and manifests the Museum’s purpose of facilitating a plurality of experiences revolving around art. The show offers a vision of a part of contemporary artistic creation through which to decipher the idiosyncrasy of our time.

For this exhibition, José María Viñuela, Helga de Alvear Foundation board member, Collection conservator and general curator for opening events has had the challenge of selecting 150 pieces: approximately 5% of the entire Collection that Helga de Alvear will donate to the institution.

The exhibit is distributed on four levels, encompassing approximately 3000 square meters of exhibition space and, above all else, grants the possibility of exploring large format sculptures and installations from a first person perspective, as well as paintings, photographs, drawings and video installations by over 100 different artists.

Artists from 26 different nations, with a large presence of Spanish (nearly one third), American and European creators, and also powerful examples from other parts of the globe – from Vietnam, Venezuela, South Africa or South Korea, to Hungary, Brazil, Switzerland – generate new constellations in the ever-changing cosmos of contemporary art.

Now that borders represent a limitation to our mobility, the Museum facilitates an oasis for physically distant geographic meetings, leaving the discovery of possible common ties, ideas and shapes that dissolve the relevance of our origins, in the hands of the visitor.

It would be difficult to find a more contemporary exhibition: over 60% of the works on display in this show were produced in the last 20 years (and approximately 50 of them were produced between 2011 and 2020). Likewise, it is also the first time the majority of these pieces will be exhibited at a museum institution. This is the case, for example, of Faux Rocks (2006) by Katharina Grosse – a seven-meter-wide painted volume that surprised all who had the opportunity to observe it at Helga de Alvear Gallery -, or Power Tools (2006) by Thomas Hirschhorn, which has only been on display once, at the Kunstmuseum in Wolfsburg, and will now be viewed once again.

Taking advantage of the space purposely created to house the works, and keeping in mind the objective of using it to exhibit pieces that had never before been on display were key parameters in obtaining a result that would guarantee an inviting approximation to the infinite depth of the Collection.

José María Viñuela (Ibrahernando, Cáceres, 1944) is a board member of the Helga de Alvear Foundation, Collection conservator, Main Curator for opening events at the Helga de Alvear Museum and is responsible for the museographic design of exhibition installations.

Educated at the Facultad de Ciencias of the Universidad Complutense and at the Escuela Técnica Superior de Arquitectura (1961-1968), in 1974, Viñuela moved to Hamburg in order to continue with his education at the Hochshule für Bildende Künste. After his return, in the years between 1974 and 1977, he worked as an assistant for architect José María García de Paredes on projects such as the Manuel de Falla Auditorium in Granada, or Casa Narciso Yepes in Madrid, among others.

In 1978, he was named Head of Exhibitions and Museography at the Museo Municipal de Madrid and in 1980 he was named Artistic Advisor for Banco de España. After this period, in 1983, he was named Heritage Conservator of the Banco de España, a position he held until his retirement in 2015. During this latter stage, he oversaw an important remodeling of the institution’s network of subsidiaries and of both central buildings in Madrid. Furthermore, he worked on the consolidation of the Bank’s artistic collection through the acquisition of more than fifty historical works – among which are two portraits by Francisco de Goya – and also established the Contemporary Art Collection at Banco de España through the incorporation of over one thousand works and approximately 4000 chalcographic engravings. From 1981 onward, he has attended the most relevant events in the artistic world: documentas, manifestas, biennials and international fairs, while also being knowledgeable on the context international museums. He has organized and curated over one hundred exhibitions in Europe, America and Asia; given numerous conferences; been part of a range of architecture and art juries and has published articles and texts regularly. Between 1997 and 1998, he was a member of the European Central Bank Cultural Committee and of the committee responsible for selecting iconographic motifs for the euro.

José María Viñuela participated in the creation of the Helga de Alvear Foundation and has frequently contributed to the development of the project from its inception. His recent curatorship of this new phase in the development of the Helga de Alvear Museum included the design of the museographic project and compartmentalization of exhibition space, as well as the selection of works from the Collection to be included in the show, their installation within the venue and the edition of the catalogue.