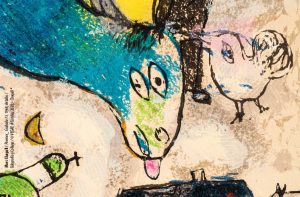 The Barrié Foundation presents the largest exhibition of graphic work by Marc Chagall (Vitebsk, Russian Empire, 7 July 1887 – Saint-Paul de Vence, France, 28 March 1985), one of the most important painters and graphic artists of the 20th century and one of the most unclassifiable artists. His very personal painting style, with a deep expressive knowledge of colour, is linked to memories of his childhood, nature, poetry, fantasy and Jewish folklore and of life in his hometown.

More than a hundred works, from The Art Company Collection in Italy, will offer a serious tour of Marc Chagall’s graphic work which, through four series, cover the period from 1927 to 1968 and allow the visitor to appreciate the evolution of the Russian artist in the handling of the plate, as well as his mastery of the different printing techniques.

“The Fables of La Fontaine,” although they were only published as complete works in 1952 thanks to the publisher Tériade, are part of the three sets of illustrations commissioned by the gallery owner and editor Ambroise Vollard, which include, in addition to The Fables, The Dead Souls and the Bible. In the prints made between 1927-1930 we see Chagall giving himself over to etching with extraordinary results. The artist’s technical creativity can be seen in the variety of his strokes, in the use of varnish to obtain pictorial effects and in the use of spiked brushes to create frameworks of signs.

In the 1957 series entitled Chagall, the visitor can admire one of the first publications illustrated with colour lithographs, a journey that began with the famous Thousand and One Nights in 1948. These works were conceived to accompany an essay on the Russian artist by Jacques Lassaigne, a Parisian historian and art critic who is among the most influential scholars of Modern Art. The artist alternates markedly monochromatic compositions with color plays in the spectrum of primary and secondary colors where stroke, graphics, drawing and background are amalgamated. In Chagall, the lithographic medium releases new expressive potentialities, while at the same time it welcomes some of the most outstanding elements of his iconographic apparatus.

The exhibition continues with Chagall Litographe (1960), a series of prints made for the first volume of the catalogue raisonné of the artist’s lithographic work. Books that are true and genuine artist’s books, accompanied by a collection of original works of the highest level. In addition to the fact that we can admire how much his mastery of the lithographic medium has progressed, we can see that the series is developed around fairly well-defined thematic nuclei: the circus, lovers, Paris, the mixture of human and animal and of male and female and the angel, without Chagall leaving aside the constant autobiographical references.

The tour concludes with Poèmes (1968), which represents one of the masterpieces of 20th century artist’s books. The 24 engravings, designed to accompany a selection of Chagall’s poems composed between 1930 and 1964, are, by technical achievement and conception, the result of the artist’s full maturity in the field of graphic work. 138 wooden plates and two years of work bear witness to the enormous dimension of the project. Chagall chose woodcut to combine with collage. Although these works do not lose their expressive freedom in relation to the lithographic medium, they seem to give up immediacy for a work that digs deeper into the support, an excavation in layers. The compositions are presented as an essay, measured and variable in time, of Chagallian poetics. Elements in the manner of narrative ready-mades which, in a mixture of the sacred and the profane, the autobiographical and the dreamlike, offer the spectator an intimate and very vivid compendium of the artist’s work.