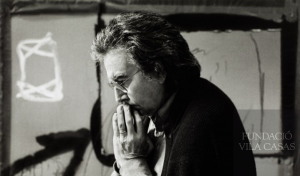 As announced in April 2019, the Vila Casas Foundation and the Vila-seca City Council have signed a four-year collaboration agreement that turns the Castle into a contemporary art exhibition space.

With the title Antoni Tàpies. The resistance of the sign, the Vila Casas Foundation, proposes a great exhibition by a Catalan creator with one of the most international recognition in the second half of the 20th century. Antoni Tàpies, painter, sculptor, engraver and art theorist, is one of the highest representatives of “European Informalism,” the artistic movement that seeks to respond to the spiritual crisis that is going on in Europe after World War II.

The exhibition comprises a set of 62 engravings made in the workshop of Joan Roma, between 1989 and 1993 and which have the distinction “bon à tirer,” that is, the proofs are ready for editing, those that the author of the engraving use a as a pattern for printing. Following the works contemplated by the exhibition, which also includes the sculpture “Campana,” a proposal that demonstrates the contemplative and transcendental aesthetic used by the artist to deepen the properties of the material, we enter the universe engraving, the process that allows an image to be printed on paper using a metal plate (copper, zinc, iron, etc.) on which an incision was previously made.

The exhibition can be visited in the Castle of Vila-seca until November 1, 2020.