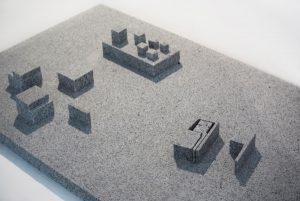 In Act 38 at Nivell Zero, Mònica Planes shrinks the exhibition space down so that we can touch it with our hands and relate to it in different ways; she invites us to explore its possibilities in our head and peel back its many layers and characters. In short, she replicates it over and over again, stripping it down to its core structure, its zero state. In a world of images in the midst of a crisis of presence, she conjures up objects which become close-up images that connect with the environment that surrounds and contains us. In turn, these items equip us with tools to create our own place, like playing a wordless game of observation and associations.

Each of the pieces that furnish the gallery—from the most rigorously literal to the simplest and most geometrically abstract—talks of the site that contains it: Nivell Zero at the Fundació Suñol. But if we understand space as the arrangement of the items that occupy it, the artist here defines it through sculptural manipulations that both rearrange and transform it. In this way, her work intertwines sight and presence in a self-referential game in which architecture, model and object dress themselves up as one another and swap the appearances and properties that let us recognise them.

Mònica Planes filters into Nivell Zero to make use of what can be found here when it is supposedly empty. The floor tiles, the concrete, the light and the glass, even the institution’s logo: these are all her raw materials for creating pieces that become prolongations of space.

Mònica Planes graduated in fine art from the University of Barcelona (2014) and did a Master’s Degree in Artistic Production and Research (2014–2016). In 2016 she was awarded both the Han Nefkens/UB Grant and the Fundació Felícia Fuster Sculpture Grant, and this year she won a grant from the Fundació Guasch Coranty. After finishing her master’s degree, she undertook an artist’s residence at Montrouge, Paris, as part of the Jeune Création Européenne programme, and she is currently an artist-in-residence at Fabra i Coats, Barcelona, on a 2017 SAC-FIC grant.