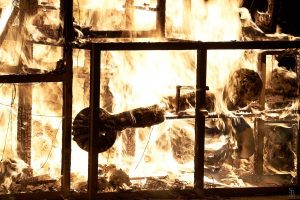 The Fundació Suñol is pleased to present the project that Daniel G. Andújar (Almoradí, 1966) created for documenta 14, in 2017. Conceived as a visual protest against violence, it offers a present-day take on the representation of conflict in order to reveal its effect on people.

The first edition of documenta was held in 1955 with the aim of renewing the dialogue between Germany and the rest of the world that had been broken off by the Second World War, as well as making contact with the international art scene through a “presentation of 20th-century art”. The city of Kassel has played host to this event ever since and over time has become an indisputable benchmark for the evolving arts. The 2017 edition was entitled Learning from Athens, since it was not only held in Kassel, as usual, but was also on show beforehand in Athens.

The curators for documenta 14 invited the selected artists to think about the social and political situation in Europe and the rest of the world, as well as the palpable tension between North and South. This was the framework in which Daniel G. Andújar created the piece on display at the Fundació Suñol.

In Athens, the artist presented the first part of the project, entitled The Disasters of War: Repatriation Akademia, an interdisciplinary work centred on the ideas of nationality, public domain and cultural and intellectual property, as well as authenticity, reproduction, theft and the plunder of antiques. In Kassel, Andújar presented the second part of the project, The Disasters of War: The Trojan Horse, which explores ideas such as cultural identity and memory, as well as monuments, stereotypes and the concept of falsification and truth.

These two projects are being presented together for the first time, in conjunction with this publication, which contains texts by Imma Prieto and María Dolores Jiménez-Blanco.