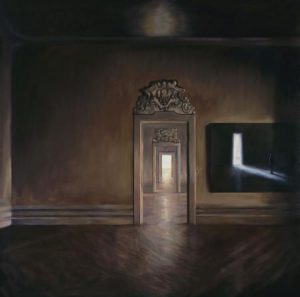 Born in Sabadell, Spain, in 1945. He lives and works in Paris and in Spain. Antoni Taulé i Pujol studies architecture in Barcelona and, at the same time, develops his painting attending the Fine Arts school La Llotja. His first individual exhibition takes place in 1966. In 1972 he completes his artistic education at the Royal Academy of Art and at the Chelsea College in London.

In the 60’s, Antoni Taulé is known for his performances and street painting. Throughout the next decade he defines his style. He paints buildings, houses, characters, objects; his paintings look very real, there is something autobiographical in them but, at the same time, there is something dreamy about them, they conform a pictorial or photographic staging (series: Espace hors temps, 1974; Vélazquez aveugle, 1975; Contre-jour, 1976; Laboratoire d’attente, 1977). During the 80’s and 90’s caves, prehistory, (Seuil de la caverne and Cromocosmos series), ruins, the desert, and also scientific research (physics, astrophysics, light, space) are a central part of his work. In the 80’s he begins designing stage scenery for theatre plays Tchekov’s The Three Sisters directed by Ariel García Valdés, 1982; Nathalie Sarraute’s Enfance directed by Simone Benmussa, 1984) and operas (Washington Square directed by Noureev at the Palais Garnier in Paris and the Metropolitan in New York, 1895). At the end of the 90’s his work represents building sites, geometrical spaces, perspectives. These creations are always uninhabited, there are no characters; his trips are reflected on them (Fonction F, 2003; Destruction des symboles, 2006). Antoni Taulé also works in photography and in book illustration.