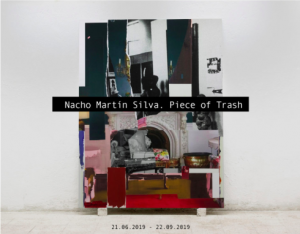 At this exhibition, Nacho Martín Silva, winner of the biennial 2017 Pilar Juncosa & Sotheby´s Award for Artistic Creation, reformulates images through a process in which the original image is destined to disappear, while the ensuing series continues almost ad infinitum.

Understanding the method behind the work on show is fundamental in grasping the significance of the latter. This deals with ideas like the elimination of hierarchies in representation, editions as a genealogical process as opposed to a reiterated one, or reinterpretations of history and its images by combing and rearranging them.

The work method was founded on a succession of ordered steps that followed an unforeseeable course:

During the first stage, the artist took two small collages as a model (21 x 14 cm) and made a painting of each of them. He then recorded them photographically. The resulting enlarged developed prints and the archive images used for the two initial small collages served as material to make the first two collages in this series (no. 1, no. 2). When these collages were finished, the two previous paintings were destroyed with a chemical solvent and the damaged outcomes were photographically recorded.

During the second stage, a third collage was made (no. 3), using the large photographic prints of the initial two collages and the photographs of the solvent-damaged paintings. A photograph was taken of this third collage, and the print of it and leftover printed material from the previous collages served to make the next work in the series. The photo that was taken of the latter was used with any leftovers from previous works to make the next one and so on in a process whose end is only dependent on the total disappearance of all the leftovers used as raw materials for each new collage.

Piece of Trash is a eulogy to leftovers and to the equivocal as opposed to the unequivocal.

As with the artist’s other work, fragmentary visions and images associated with key events and stages in history (in these collages we can try to locate the remains of images of the 2nd World War, Cold War or Great Depression) challenge official versions of events and the veracity of images as archives, helping us to take an active role in the construction of a “Major Historicist Account”. It is in this sense that we must take the series of photoengravings that accompany the collages. Far from being a mere mechanical reproduction of them, they are individual works that can be combined in different ways to achieve new visual narratives.

Given the nature of the works of art presented at this exhibition, they must be construed as one of many possible versions.

The Fundació Miró Mallorca would like to thanks the kind collaboration given by the Kells Colletion, Santander  and The Maria Cristina Masaveu Foundation, Madrid, in this project. The Fundació acknowledgements too the dedication of all the persons that have made it possible.

A monographic publication in the Pocket series has been dedicated to his work, entitled “Nacho Martín Silva por Juan Francisco Rueda”, published by Nocapaper in 2016, and his work is featured in the book by David Barro “2014. Antes de irse. 40 ideas sobre pintura”, published by Arte Contemporáneo y Energia A.I.E and DARDO Editorial, 2013.

He is currently represented by Galería JosedelaFuente (Santander) and Galería Max Estrella (Madrid).