Fundació Joan Miró:Kader Attia “Scars Remind Us that Our Past Is Real” 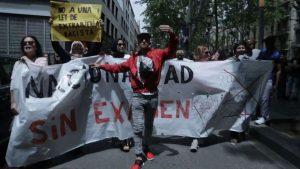 Kader Attia (Dugny, 1970) defines his artistic practice as the embodiment of a political experience. His work is an exploration that stems, in his words, from the “urge to recover, through form, the field of emotion in the public debate with the aim of repairing the wounds of history.”

Scars Remind Us that Our Past Is Real is Kader Attia’s first solo show in Spain. Attia sets up a dialogue between some of his most salient works from the last years and newly-produced pieces to accompany visitors through episodes of intense friction between cultures that have suffered unequal relationships and still do.

The exhibition begins with works that link modern architecture and colonial history. A large floor piece made of couscous alludes to the legendary city of Ghardaia in the Algerian desert. This phantasmagoric image serves as a metaphor of the dynamics of dispossession, appropriation, and reappropriation of knowledges that have dominated East-West relations, and is the result of Attia’s research on the influence of North African vernacular architecture on Western modern architects such as Le Corbusier. Indépendance Tchao, is a sculpture that takes its inspiration from a 1960s derelict hotel building in Dakar, Senegal, made of index card boxes from the French colonial Algerian police headquarters, which was keeping rebels’ information during the war of independence.

The marks of the past are the central theme around which the next room revolves. Open Your Eyes is an installation in which images of traditional African objects are paired with photographs of disfigured veterans from the First World War. The sculpture Chaos + Repair = Universe, made of mirror fragments assembled with copper wire, suggests, by the endless reflexion of the mirrors facing inside, the cycles of destruction and repair. The effects of globalization on migrant populations, visible today as physical wounds of colonialism, are the subject of the 49 minutes three-screen installation that Attia has produced specifically for the exhibition. Héroes Heridos (Injured Heroes) is based on interviews and dialogues shot in Barcelona that gather personal accounts by activists and undocumented migrants, who are occupying “La Massana,” the former School of Arts, where Kader Attia himself was a student. As a political action, this film gives voice to people we usually don’t listen to in traditional media where they are drowned out by information overload. As in his political discursive project space in Paris La Colonie, Kader Attia uses film to bring the fight of anonymous activists into the museum, to amplify their message in a context, where it is unexpected and difficult to avoid.

A wall sculpture of mirror-polished stainless steel cut with an angle grinder reflects and confronts visitors as they enter a room with slashed canvases that have been repaired with embroidery. In the next room, J’accuse is an installation featuring a series of busts carved in wood, based on the “broken faces” of soldiers from WWI. The ensemble includes the projection of Abel Gance’s eponymous anti-war film from 1938. For the first version of this film in 1919, the director had asked actual former soldiers from WWI to participate. After first declining his invitation, years later, in 1938, with the threat of Nazism, Abel Gance asked the same people again to act in a new version of this film, at which point they accepted because of their awareness of the threat of another war coming up… J’Accuse closes the second section of the exhibition dedicated to injuries and repair.

The exhibition concludes with Reflecting Memory. The film relates the phantom limb syndrome—the perception of often painful sensations coming from an amputated limb as though it were still connected to the body—to the injuries left by historical traumas that live on in the collective psyche and continue to send out calls for repair.

Attia has been awarded the 2017 Joan Miró Prize, jointly granted by the Fundació Joan Miró and Obra Social “la Caixa.”