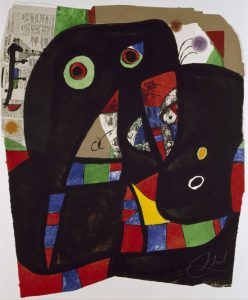 The exhibition Miró-Gaudí-Gomis highlights the influence of the Modernista architect on Miró’s production through a group of prints titled Gaudí Series, comprising twenty-one pieces in a variety of sizes and featuring fantastic characters with which the artist paid tribute to the architect in the mid-1970s. Miró was particularly drawn to the rhythm and structure of Gaudí’s work; he shared his urge to question the use of existing procedures and materials as well as a deep bond with nature, the generating force behind his creations. The treatment of colour and the use of curved lines in these prints are reminiscent of the trencadís broken-tile mosaic technique, a hallmark of Gaudí’s work.

Miró and Gaudí also shared a sculpture technique: modelling objects played a major role in both their methods. The result is apparent in the selection of sculptures also on display in this exhibition. Miró used assemblages of found objects to create new beings, in a clear parallel with the almost living forms in Gaudí’s architecture.

The exhibition is rounded off with a series of photographs by Joaquim Gomis (Barcelona, 1902-91), a renowned photographer and friend of Joan Miró. Gomis was also a key figure in drawing renewed attention to the life and work of Antoni Gaudí; he published several books of photographs, which he named fotoscops, featuring Gaudí’s work. Gomis’ images of architectural details evoke the forms that Miró would later apply in his sculptures.