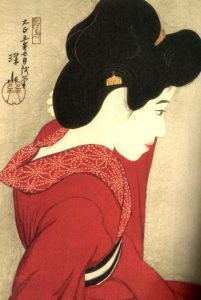 In the late nineteenth century, Japan experienced a process of modernization and industrialization that threatened its more traditional art forms, one of which was ukiyo-e. That universe of ‘pictures from a floating world,’ inhabited by courtesans, samurais, geishas and actors from the Japanese kabuki theatre, was jeopardized by the growing Western influence which, in turn, in the course of its experimentation with new techniques, materials and forms of expression, incorporated elements of Japanese printmaking into art nouveau.

Several years later, in the early twentieth century, a group of artists and publishers rekindled traditional Japanese art through shin hanga, an art movement that followed in the footsteps of ukiyo-e and succeeded in preserving a space for the printmaking tradition in the context of the new times, endowing it with a new sensibility.

In this exhibition the Fundació Joan Miró is featuring the work of one of the great masters of shin hanga, Itō Shinsui (1898-1972), whose artistic and aesthetic approach helps us reveal, once again, the subtle and deep connections between the work of Joan Miró and Japanese art and thought. A serene observation of objects and a search for new perspectives capable of reaching beyond the influence of old images and traditions, are some of the conceptual and creative coincidences between the two artists.

illustration: Before the mirror, 1916, Woodblock prints with ink and pigments on paper
© Taiyo no Hikari Foundation, Japan, 2018