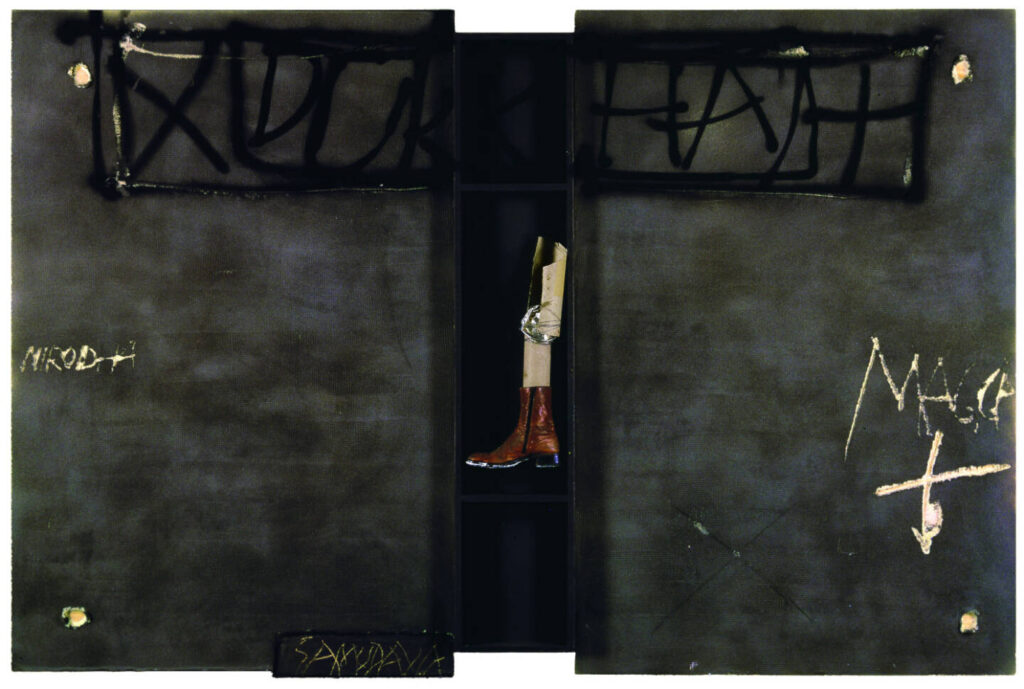 This exhibition focuses on the work that Tàpies produced in the first half of the 1990s. During those years, Tàpies seems to have been dominated by a certain melancholia. Despite the success he had achieved, despite being busy with exhibitions and awards, and despite the creation and opening of the Fundació that bears his name, during this time Tàpies made constant references to death and, more specifically, to pain, to the physical pain implicitly associated with life. It seems that Tàpies was starting to be aware of the inexorable passage of time and his own advanced age.

At the same time, the fall of the Berlin Wall in 1989 and the subsequent break-up of the Soviet Union signalled the failure of the political project with which he had identified. For Tàpies, as for many other left-wing intellectuals and artists of his generation, the collapse of state socialism seemed to have exhausted the historical trajectory of socialism itself, while capitalism presented itself as an insurmountable horizon in which any sense of utopia was no longer possible and the past was reduced to its totalitarian dimension.

In addition, during those years, conflicts such as the Bosnian war, which Tàpies felt very close to when he visited Venice to present his exhibition at the 1993 Biennale, or the Rwandan genocide, which he knew about from reading the newspapers and watching television, left their mark on certain works of this period, in which images of mortuary shrouds, bones and skulls, and allusions to death and pain frequently appear. The exhibition includes highly representative works such as Embolcall (Wrapping, 1994), Rèquiem (Requiem, 1995) and Dukkha (1995), alongside works that have never been exhibited before, such as Quatre elements (Four Elements, 1992) and Abans-després (Before–After, 1994).

Dukkha is a Buddhist term that is difficult to translate because it has a very broad meaning in the original language, Pali, which includes several nuances: disappointment, dissatisfaction, suffering, pain, restlessness, imperfection, discomfort, frustration, irritation, pressure, agony, emptiness, tension, existential anguish. All these notions perfectly describe the state of Tàpies’ at this particular moment. However, as Tàpies explains in Gregory Rood’s 1990 documentary for the BBC, which also accompanies the exhibition, it is not an allusion to pain and suffering in order to become a victim, or to let oneself go, but a conscious attempt to live with it, to overcome it and, perhaps, in spite of everything, to achieve happiness.