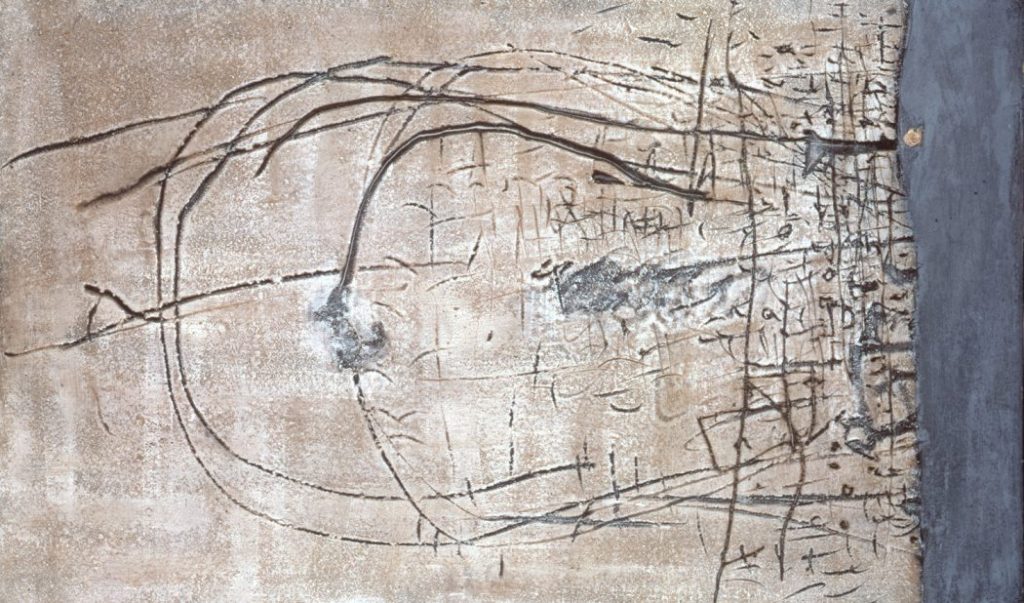 In celebration of the Fundació’s 30th anniversary, this exhibition focuses on the period when Antoni Tàpies was in his thirties: the decade between 1953 and 1963. It was during those years that Tàpies’ art reached maturity with the creation of the so-called matter paintings.

These works were characterised by their dense textures and a restricted range of colours, predominantly grey, ochre and earthy tones. It was with these paintings that Tàpies assumed a prominent place in Spanish and international avant-garde circles.

During the 1950s, a series of exhibitions and awards helped to determine his pre-eminent position. The members of Club 49 were the first to promote his work in Barcelona, whereas internationally it is impossible to underestimate the contributions played by the New York gallery owner Martha Jackson, with whom Tàpies began exhibiting in late 1953, the art critic Michel Tapié and the gallery owner Rodolphe Stadler, with whom he first exhibited in 1955–56. Tapié and Stadler brought together a number of artists from Europe, the United States and Japan, who shared the same aesthetic sensibility, and who in subsequent years contributed to changing artistic tastes in post-war Europe.

This exhibition will feature a series of works by Tàpies from the Fundació and the artist’s family, together with loans from museums and private collections. The selection pays particular attention to those works that have not been exhibited for some time, or which are largely unknown to the general public because they come from private collections. In addition, the exhibition will be accompanied by documentation to contextualise the evolution of Tàpies’ work during a period that established the foundations of a cultural critique allied to the political movement opposed to the Franco regime, and which would fully emerge during the second half of the 1960s.