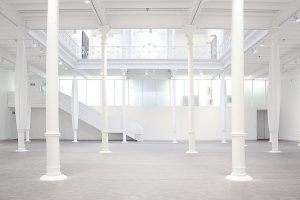 Jennifer Allora (b. 1974, USA) and Guillermo Calzadilla (b. 1971, Cuba) have collaborated on an expansive and experimental body of work since 1995. Through a research-based approach, their works trace intersections of history, material culture, and politics through a wide variety of mediums, namely performance, sculpture, sound, video, and photography.

On February 4, 2018, the Fundació Antoni Tàpies will host Allora & Calzadilla’s first individual institutional show in Spain that will assemble together a constellation of works from 2005 to 2018. The exhibition embodies the poetic and experimental approach that, while adamantly defying categorization, invokes the hybrid spirit that the artists have cultivated over the past twenty years.

The show will also establish a conversation with Puerto Rican Light (Cueva Vientos), a long-term, site-specific Dia Art Foundation commission in Guayanilla-Peñuelas, Puerto Rico that closes only days before the opening. This conversation, in the form of lectures and screenings ,proposes a meditation on the artworks as a convergence of disparate planes of reference and complex relationships.

Similarly, the forces at play in Puerto Rico’s geopolitical reality, as “non-incorporated” territory of the United States, will resonate deeply in the context of Barcelona’s present reconfiguration of its wounded sovereignty. The exceptionality of the present conjuncture in Puerto Rico has deeply affected both the conception of the show and of its related publications. In keeping with the artists’ political commitment to Puerto Rico and their ongoing exploration of the pitfalls of its sovereignty, the Fundació Antoni Tàpies will publish, in addition to the exhibition catalogue, a critical edited volume analyzing Puerto Rico’s exceptionality within the USA.

A Modest Proposal: Puerto Rico’s Crucible is conceived as a public platform to address the critical status of this Caribbean community as a first step to outline a progressive agenda and rethink its futures. By taking its cue from Jonathan Swift incisive and creative indictment of the abuses of colonialism, the book appeals to the creativity of the political imagination to tackle a myriad of urgent questions, ranging from the colonial legacy of inequality to fuel poverty, climate change, debt and austerity measures, to name just a very few.