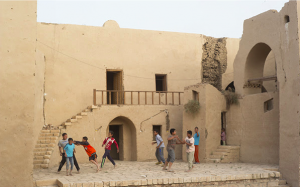 The project that Collins presents at the Fundació Antoni Tàpies focuses on the Egyptian architect Hassan Fathy (1900-1989). In these photographs, either mounted in sequence and screened as a film, or presented in large formats, Fathy emerges as the spectre of a forgotten modern vernacular legacy. The remains of large projects conceived in the twentieth century, such as that made in New Gourna (1945-47) or the one in New Baris (1965-67), are subject to a perspective that seeks formulas for the future. Through photography, the architectural works of Fathy are redeemed from the decay and ruin that threatens them. The work that Collins has done around Fathy could be understood as a collaboration that is only possible thanks to photography. This move goes beyond a tribute to the memory of the utopian projects carried out by Fathy, recognising them as one of the most important contributions in the fields of architecture and urbanism in the Arab world.

Hannah Collins (London, 1956) has been recognised for the complex documentary dimension of her photographs, which are often presented in large formats or in sequences that bring together several images of the same place. Since the 1980s she has been considered one of the most singular photographers within the international panorama. Her cinematic installations have fused aspects of collective memory, history and daily life. With her observational approach, she brings in narratives extracted from remote geographical locations. Despite having photographed fragments of the world, her images generate a depth of field that goes beyond the perception of what is local. This way of making articulates a composition that uses photography to take us to, and places in front of us, distant places. These common places will, in the final resolution of her works, end up looking like monuments.