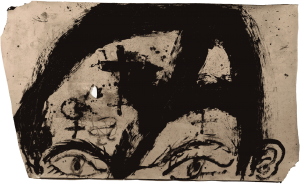 With a remit to promote the artist’s legacy, the Fundació Antoni Tàpies puts special emphasis on the collection conceived and donated over the years by Antoni Tàpies and Teresa Barba. This collection represents the artist’s entire career, with close to three hundred major works and a thousand graphic pieces, artist books and editions. The Fundació shows this collection by emphasising periods, problematics and groups of works leading to monographic exhibitions.

As we approach the 30th anniversary of the opening of the Fundació Antoni Tàpies, we will present works from 1991, the year Tàpies created a series on synthetic textiles. This material served to cover and protect the floor of Tàpies’ studio while he was painting. Manuel Borja-Villel, then director of the Fundació’s museum, made a selection that was exhibited with the title Profound Certainty. Twenty-eight years later, the Fundació returns to this set of works to show it in its entirety, recovering pieces that have not been seen before and accompanying them with a series of bronze and chamotte earth sculptures from the same period.

In 1998, the philosopher Xavier Antich, now President of the Board of Trustees of the Fundació Antoni Tàpies, wrote an essay in which he described these works marked by the constants of Tàpies’ aesthetic research: ‘Profound Certainty is, perhaps, the greatest series of the nineties, but it is not a typical series: the unity that brings together these works of 1991 is not thematic or formal, it is not a synthesis or a compendium, still less a balance; if it is a whole, it is because it lets itself be totalised, like the arithmetic of chance underlying some of the artist’s works. Each work is planted in the middle of the series, to contradict what every other work says, and to contradict is a way of saying the same, but the other way round, denying any plastic statement with its contradiction.’ 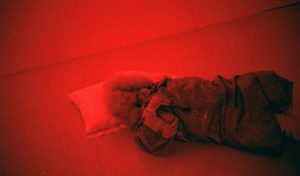 Albert Serra (Banyoles, 1975) is emblematic of a cinema that can be found in film houses as well as in museums. His work has erased the differences between these two institutions by emphasising that what counts is the viewer, often seduced by strange settings and actors from the author’s immediate surroundings. His work is not limited to film festivals, but in recent years he has participated in Documenta 13 with Three Little Pigs; the Catalan Pavilion of the Venice Biennale with Singularity; and in the production of Liberté at the Volksbühne, Berlin.

Roi Soleil (2017), a work related to the film The Death of Louis XIV (2016), will be presented at the Fundació Antoni Tàpies. Serra manages to fuse performance and installation to create, as the critic Olaf Möller said, a ‘minimalist beast’ bathed in red neon light. The images of Roi Soleil were recorded in 2017 in the Galeria Graça Brandão (Lisbon), with Lluís Serrat interpreting the role played by Jean-Pierre Léaud in the homonymous film. In Serra’s words, ‘before the visitors of an art gallery, an actor stages the slow agony of the French monarch Louis XIV, until his death, in a physical and psychological challenge of remarkable complexity’.

Roi Soleil is a reflection on the visual meaning of the actor’s face and the deep mystery behind all genuine interpretation. The three essential dimensions of this moribund body, the person, the actor (the vain person who is conscious of being filmed) and the character, are questioned and fused with sensuality and innocence.

The project will be presented at the Fundació Antoni Tàpies with the support and collaboration of Albert Serra and Montse Triola.