barcelona, spainuntil the 24th of september 2019 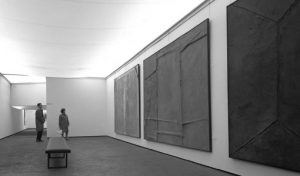 Opening in June 2018, the Fundació Antoni Tàpies will host a wide-ranging exhibition entitled Antoni Tàpies. A Political Biography. The exhibition gives continuity to and extends a series of projects, begun a couple of years ago, dedicated to re-examining the most paradoxical aspects of this artist’s work. While the attribution of a political character to the work of Antoni Tàpies is indisputable, the forms, procedures and processes of signification will question the correlation between form and political content.

Tàpies’ work was made against a political background as diverse as the post-war era, Francoism, anti-Francoism and the establishment of democracy in Spain. Despite censorship, Tàpies’ Informalist and abstract aesthetics became the sign of a silent politicisation. During the last years of the Franco regime, his painting served as an indirect agent and demonstrated an unusual capacity for mobilisation.

On an international level, Tàpies triumphed as the representative of a new generation of Spanish artists that chimed with the cosmopolitanism of Abstract Expressionism and the Art Autre promoted by Michel Tapié. His works were included in important events, such as Documenta, the Venice and São Paulo biennales, and Carnegie International. His formal exuberance, and the paradoxical and enigmatic nature of his oeuvre, made him one of the most outstanding figures in modern art.

For the first time, the exhibition will bring together groups and series of works that in the mid-1950s and 1960s established Tàpies’ identity as one of the key European artists of the post-war era, as well as works that highlight the artist’s commitment to the visualisation of the anti-Franco political struggle. In the context of this exhibition, works from the Fonds of the Fundació and loans from European collections will reveal Tàpies’ career from a biographical perspective that, far from illustrating the artist’s life, sets out to examine the life of the works in an itinerary that activates a rich and polysemic sense, and where politics is not always explicitly recognisable.

The exhibition will coincide with the publication of Antoni Tàpies. Biografia política by Enciclopèdia Catalana and the Fundació Antoni Tàpies. Also, in the autumn of 2018, the Fundació Antoni Tàpies will host an International Conference aimed at bringing together researchers and scholars who will approach Tàpies’ work as a case study to deepen the knowledge of critical modernity. These initiatives mark the beginning of a programme that will culminate in the year 2023, the year of the centenary of the artist’s birth.