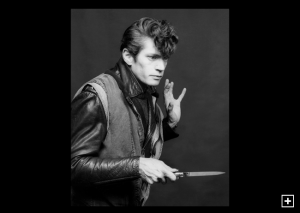 Robert Mapplethorpe (New York, 1946–1989, Boston) created some of the most arresting, polemical, and iconic images in contemporary photography. Robert Mapplethorpe: Pictures, organized in close collaboration with the Robert Mapplethorpe Foundation, brings together 179 works from throughout the artist’s career, from early collages and Polaroids, to the images of flowers, nudes, sexuality and portraits that made him one of the most notable photographers of the last century.
Having studied painting and sculpture in New York before turning to the medium of photography, Mapplethorpe was influenced by the art of Joseph Cornell and Marcel Duchamp, as well as the nineteenth-century photography of Julia Margaret Cameron and others, of which he was to become an avid collector. The artist’s early collages, assemblages and photographs, initially taken with a Polaroid camera, develop the interest in sexuality and composition — right angles, geometric shapes of light — that would come to define his mature work.  Using a fully-manual Hasselblad camera beginning in 1975 — the viewfinder framing the world in its square format — Mapplethorpe began to employ long exposures and ordered arrangements in the studio to craft portraits, still lives, and nudes whose order, balance, and content redefined photography as an art form.
Mapplethorpe treated these subjects with equal attention and precision, from cut flowers and male sex organs, to the cast of friends, lovers, celebrities, and collaborators he depicted, turning a photograph into the controlled performance between artist and subject. Both controversial and classicist, the artist’s pioneering engagement with gender, sexuality, and race is reflected in depictions of queer and non-heteronormative bodies, pleasure, and desire, in photographs suspended in the tension, as with all of Mapplethorpe’s work, between the emotive and political intensity of their content and the clarity of their composition.
Robert Mapplethorpe: Pictures is organized by the Serralves Museum of Contemporary Art, Porto, and curated by João Ribas, Director of the Serralves Museum.
All artworks in the exhibition are on loan from the Robert Mapplethorpe Foundation, New York.
Fundação Serralves,  R. Dom João de Castro 210, 4150-417 Porto | Portugal
http://Serralves.pt
Image: Robert Mapplethorpe, Self Portrait,1983 © Robert Mapplethorpe Foundation.  Used by permission.