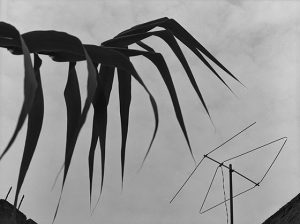 Manuel Álvarez Bravo (1902–2002) spent nearly eight decades, from the 1920s to the 1990s, photographing his native Mexico. A self-taught artist who achieved widespread recognition in his lifetime, Álvarez Bravo began his career in the years following the Mexican Revolution (1910–1920), during a period marked by modernization, internationalism, and cultural renewal. Many of his photographs display a keen awareness of the incongruity between traditional customs and modern life in fast-changing urban centers like Mexico City. In 1927, Álvarez Bravo met photographer and activist Tina Modotti, who introduced him to a circle of artists and intellectuals that included Edward Weston, José Clemente Orozco, Diego Rivera, and Frida Kahlo, whose portrait he made on several occasions.

Some of Álvarez Bravo’s earliest pictures were formalist studies of folded paper and abstracted close-ups of everyday objects. When he expanded to other subjects—from votive images and religious artifacts to rural landscapes and sidewalks crowded with pedestrians— Álvarez Bravo brought to them a poetic sense of light, composition, and perspective that privileged mood and metaphor over documentation. He had an eye for evocative associations and gave many of his works lyrical titles that enhance their air of secret significance.

Álvarez Bravo’s work was celebrated by André Breton, the founder of Surrealism, and by poets like Xavier Villaurrutia and Octavio Paz. Villaurrutia called Álvarez Bravo a “poet of the image,” asserting that his best photographs “confront us with veritable representations of the unrepresentable, tangible proofs of the invisible.” The charged, atmospheric quality of Álvarez Bravo’s images is often achieved through dramatic contrasts and dynamic lines, but he was also a master of subtle textures and rich middle values. His photographs established a distinct visual identity for Mexico—one full of nuance, intimacy, and silence.