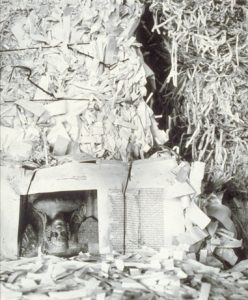 In the 1970s, photographer Hana Hamplová (Czech, born 1951) was commissioned to create the cover for a samizdat (underground press) publication of Bohumil Hrabal’s novella, Too Loud a Solitude. The story, written in 1976 and set in Prague, follows an eccentric man named Hantá who operates a paper compactor; he muses over the power of books while carrying out their destruction. The photographs Hamplová produced—stark black-and-white images of torn, warped, and peeling fragments and reams of paper—underscore Hrabal’s exploration of the destruction of books, and by extension the fragility of paper as the medium through which meaning and ideas are communicated.

The fear of losing the precious store of culture and knowledge represented by paper and books was one that Hrabal knew intimately. One of the most prominent Czech writers during Communist rule, Hrabal contended with restrictive censorship laws throughout his career, and he was banned from publishing his work for an extended period. In Too Loud a Solitude, Hantá is possessed by an insatiable passion for knowledge and a love of literature, art, and philosophy that leads him to rescue countless books from the jaws of the compactor. In the 1950s, Hrabal worked at a wastepaper recycling center where, like his character Hantá, he pilfered books to assemble a salvaged library.

To fulfill her commission, Hamplová frequented recycling centers in Prague, where she became inspired by the vulnerability of paper and its ability to transmit messages and ideas. As she described the experience later, she found it poignant to see paper that had “lost its functional identity,” having been removed from its original context. This freeing of paper from traditional associations allowed her to “express the principle of harmony or conflict.”

The resulting photographs explore dimensions of paper that are both familiar and startlingly foreign. Some recall the material beginnings of paper—as trees and other plant forms. Others reflect more formal considerations, evoking abstract landscapes. Ultimately, Hamplová’s photographs point beyond their political and literary context, prompting new readings of such a common commodity as paper.