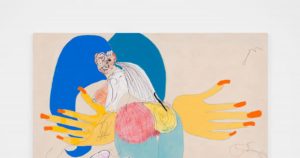 Tschabalala Self, is the artist’s first solo museum exhibition in the United States, opening simultaneously is the US west coast debut of the collective Ramin Haerizadeh, Rokni Haerizadeh, and Hesam Rahmanian, as well as an immersive installation by Seattle-based dance artist Jody Kuehner featuring daily performances by her drag-clown alter-ego Cherdonna Shinatra and dance company DONNA.

Tschabalala Self
Tschabalala Self’s work examines the intersectionality of race, gender, and sexuality, focusing particularly on the iconographic significance of the black female body in contemporary culture. Self creates exuberant, multilayered personalities—not depictions of herself or others, but “avatars”—that celebrate complexities of black life that are often obscured in the American imagination by stereotypes. The artist’s first solo museum exhibition in the United States, Tschabalala Self brings together figurative works in painting, sculpture, and video, populating the gallery with characters from across her budding career. The exaggerated physical attributes of Self’s figures reflect her own experiences and entrenched cultural attitudes toward race and gender. Through owning and amplifying these traits, her unruly subjects disrupt expectations, declaring their agency and physical autonomy. Seen leaping, coupling, and contorting their bodies according to their own desires, Self’s avatars assert that ordinary pleasures can also be acts of defiance.

Organized by the Frye Art Museum and curated by Amanda Donnan.

The Rain Doesn’t Know Friends From Foes: Ramin Haerizadeh, Rokni Haerizadeh, Hesam Rahmanian
Ramin Haerizadeh, Rokni Haerizadeh, and Hesam Rahmanian work collectively to create installations and stop-motion animations that transform found materials in order to critically examine contemporary history-in-the-making. The Dubai-based artists’ animations are composed from thousands of individual works on paper, in which they collage and paint over printed stills from internet videos and newscasts. By detaching news imagery from its original context, this body of work estranges and opens up its encoded meanings while interrogating the entertainment value of reportage and the voyeuristic role of the spectator as a passive consumer of mass-media spectacle. The Rain Doesn’t Know Friends from Foessurveys the artists’ animations to date and features a selection of related works on paper; this includes the US debut of From Sea to Dawn (2016–17) and Macht Schon (2016), which reflect on the global immigration crisis. A timely meditation on empathy and the documentation of tragedy, the exhibition furthers the artists’ ultimate aim: breaking down the “othering” effect of virtual bystanding and promoting recognition of our social interdependency and the value of solidarity.

Organized by the Frye Art Museum and curated by Amanda Donnan.

Cherdonna Shinatra: DITCH
Seattle-based dance artist Jody Kuehner skewers social and cultural norms of gender and sexuality through her persona and alter ego Cherdonna Shinatra. Combining contemporary dance, drag, clowning, and the lineages of feminist and queer performance, Cherdonna defies categorization to dismantle the patriarchy and seek more liberated ways of being. DITCH takes the form of a wildly colorful, multisensory environment that purposefully rejects the traditionally “neutral” white-walled gallery. Acknowledging the museum as a space historically dominated by men, DITCH is instead a matriarchal domain, presided over by MomDonna, a larger-than-life disembodied sculpture in a state of ruin that births the performers—Cherdonna and members of her dance company DONNA—each day. Over the course of eighty performances, Cherdonna and her six companions will seek to counteract the drudgery and turmoil of modern life by unapologetically inhabiting their femme selves, indulging in a quest for retribution and visibility in this trash fire of a world.

Organized by the Frye Art Museum and curated by David Strand, head of exhibitions and publications.