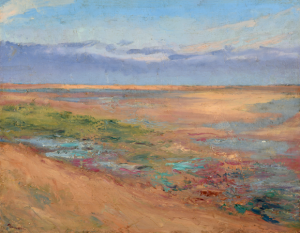 Towards Impressionism traces the development of French landscape painting from the schools of Barbizon and Honfleur up to Impressionism, featuring over forty works from the extraordinary collection of the Musée des Beaux-Arts, Reims. Selections from the Frye Art Museum’s own holdings will be incorporated into the show, making this a unique opportunity to situate masterpieces from the collection within their original context.

The Reims museum has one of the world’s foremost collections of landscape paintings by artists associated with the Barbizon colony—artists like Théodore Rousseau, Charles-François Daubigny, Jean-François Millet, and Constant Troyon who gathered in the village of Barbizon between 1830 and 1855 to paint in and around the nearby Forest of Fontainebleau. Fascinated by the mysteries of the forest and rural tradition, the Barbizon artists rejected urban life and the teachings of the French Academy. Where previously landscape had served only as backdrop for allegorical or historical tableaux, the Barbizonists painted landscape for its own sake, working from observation but often infusing their subjects with an emotionality reminiscent of Romanticism.

One of the most significant artists to frequent Fontainebleau, Camille Corot, is a particular focus of the exhibition. Corot’s long life (1796–1875) coincided with the period in which idealized, classically-inflected views of foreign lands like Italy—executed in the artist’s studio and composed according to Academic principles—gave way to native French landscapes painted out-of-doors in direct response to the scenery. Corot also traveled frequently to the Normandy coast, painting in the seaside environs of Honfleur. Later, from about 1850 onwards, a circle of artists would converge in the village around Eugène Boudin, whose preoccupation with light, reflection, and “instantaneity”—most often applied to nautical scenes painted entirely en plein air—would influence the work of visitors like Gustave Courbet and Claude Monet.

Tracing the development of French plein air painting through these seminal figures and their favorite locales, Towards Impressionism witnesses the century-long cultural shift away from the Academy that legitimated landscape as a subject, elevated the subjective experience of the artist, and ultimately gave rise to Modernism.

Towards Impressionism: Landscape Painting from Corot to Monet is curated by Suzanne Greub and managed by her team at Art Centre Basel in collaboration with the Musée des Beaux-Arts, Reims and the City of Reims, France.