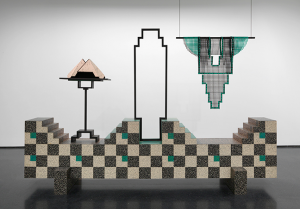 Clothing is both a highly personal and socially constructed system of communication: a signifying point of contact between individual identities and collective attitudes, customs, and trends. Dress Codes brings together the work of two artists who perform acts of translation in relation to clothing’s form and ornamentation, pressing images of historical garments—and the values encoded within them—through the interpretive interface of the grid. Though they begin from different types of source material and seek divergent ends, Ellen Lesperance and Diane Simpson both employ the gridded instructional diagram as a means for transformation across time and dimension. In the process, they return the grid, an idealized format associated with Modernist abstraction, to the practical ethos of the applied arts and domestic craft, connecting the everyday language of dress to wide-ranging cultural and political histories.

Lesperance creates gouache paintings based on the attire of women activists using American Symbolcraft, the visual shorthand of knitting patterns, in which the color of each stitch is shown as a single cell within the matrix of specialized graph paper. Working from footage and photographs of protest movements—most notably the Greenham Common Peace Camp that mounted anti-nuclear-armament demonstrations in Berkshire, UK from 1981 to 2000—the artist carefully translates activists’ (often homemade) clothing into the flattened space of hand-ruled paper, extrapolating to fill in areas that are invisible within the source images. The paintings function as standalone artworks and also as directions for re-making the pictured garments, as homage to the original wearers, a record of their ideological symbology, and stimulus to likeminded action in the present.

Simpson’s sculptural work begins with illustrations found in antique clothing catalogues, window dressing manuals, and histories of dress. Submitting pliable articles like collars, cuffs, aprons, and bonnets to the rigid constraints of a two-dimensional diagram—modeled on axonometric projection employed in architectural drawings, which integrates multiple viewpoints into a single image—the artist renders their forms in a foreshortened perspective that she then maintains when constructing three-dimensional versions. The resulting angular distortions—coupled with dramatic shifts in scale and materiality—both estrange and magnify the garments’ relationship to the body, underscoring their sociological significance as imposed expressions of gender norms, class status, and morality.

Through the process of encoding structure into schematics, both Lesperance and Simpson transform their source material into something new, embedding their own perspective in translations of the past. Dress Codes brings their work into conversation for the first time, highlighting their body- and craft-adjacent use of the grid as a feminist alternative to patriarchal representational traditions of painting and sculpture.

Ellen Lesperance (American, b. 1971, Minneapolis, Minnesota) lives and works in Portland, Oregon. Her work has been exhibited nationally at the Brooklyn Museum of Art, New York; The New Museum, New York; the Portland Art Museum, Oregon; the Drawing Center, New York; and Seattle Art Museum, Washington and internationally at the Bonniers Konsthall, Stockholm and the Tate St. Ives, England. She has received grants and awards from the Robert Rauschenberg Foundation, Art Matters, Pollock-Krasner Foundation and the Ford Family Foundation.