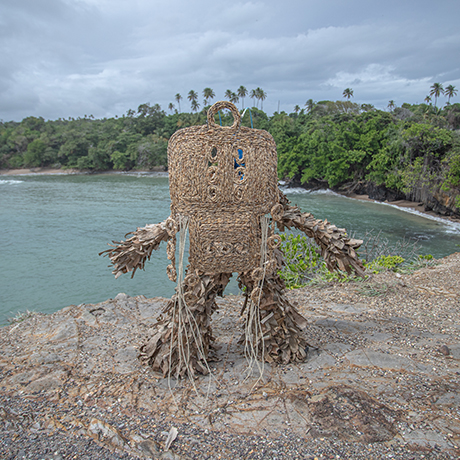 As we witness the exponential escalation of inequity bringing our world to the economic and environmental brink of collapse, I am persuaded that although we may not prevent the end of the world, we can be seed bankers for a new beginning. I see Black oral tradition as a form of seed banking with the power to germinate additional worlds, regenerative ecosystems, reciprocal economies.

Building upon an ongoing diasporic dialogue, Christopher Paul Jordan, from the United States, and Arnaldo James, from Trinidad and Tobago, present In the Interim as an offering to the Black community of the Seattle metropolitan area, to the wider African diasporic world, and to the general public.

In the Interim is a speculative project dedicated to the production of Black public space, the preservation of Black oral tradition, and the facilitation of intergenerational dialogue among people of African descent. The exhibition centers on The Interim, a soundproof recording booth that is accessible only to people identifying as Black. Participants are invited to record their predictions and prophecies for the future, which will be encrypted and stored on a hard drive; the encryption key needed to unlock the files will be included in a time capsule. Envisioned as a metaphorical seed bank, the time capsule will be buried on the Frye’s grounds, and the recordings not made public until the time capsule is recovered one hundred years thereafter.

The Interim challenges the purported stability and longevity of the Museum and destabilizes its vocation to inclusivity as it furthers restricted access and centers Black-only audiences to create a safe ritual space, ultimately testing the legitimacy of a historically hegemonic white institution to preserve critical data about Black futures. Conceived of as an island, The Interim offers a point of reverberation between Jordan’s call, a new series of paintings on windows salvaged from historically Black neighborhoods in Tacoma, and James’s response, a new collection of photographs and projections based on novel interpretations of carnival archetypes. Both bodies of work address themes of inversion and immersion, evoking the underworld and the otherworldly.

The expansive dimensions of the project—both temporal, with the centennial timeline of The Interim, and spatial, with the transoceanic works on view—embrace the essence of the Black experience in the Americas and function as a restorative proposition, at a time when identity politics, far from belonging in the past, need reimagining for and in the future.

Arnaldo James (born 1987, Port of Spain) works towards equity and prosperity, honoring the ingenuity and resilience of Black peoples in a world structure actively pursuing their exploitation. A graduate of the University of the West Indies and Cardiff Metropolitan University, James is a photographer, curator, graphic designer, and educator from Trinidad and Tobago. James’s photographic works have been exhibited within and outside the Caribbean. In 2017, James and Jordan brought a version of the Tacoma exhibition #COLORED2017 to Arima, Trinidad, renaming it Mission Black Satellite.

Christopher Paul Jordan (born 1990, Tacoma) integrates virtual and physical public space to form infrastructures for dialogue and self-determination in displaced communities. In collaboration with Tacoma Action Collective, Jordan launched the #StopErasingBlackPeople campaign combatting the erasure of African Americans from the history of the AIDS epidemic in the US. His sculpture andimgonnamisseverybody (2021) is a centerpiece for The AIDS Memorial Pathway, Seattle. Jordan’s awards and fellowships include the Artist Trust Fellowship, the Neddy Artist Award in painting, the Jon Imber Fellowship, and the GTCF Foundation of Art Award.

James and Jordan collaboratively received the 2017 James W. Ray Distinguished Artist Award, which is funded by the Raynier Institute & Foundation through the Frye Art Museum | Artist Trust Consortium. The award supports and advances the creative work of outstanding artists living and working in Washington State and is accompanied by a presentation at the Frye Art Museum.

Claire Tancons is a curator, writer, and researcher invested in the postcolonial politics of art production and exhibition. She publishes for and speaks at artistic and academic venues, as well as teaches; she is the inaugural Mellon Global Curatorial Professor at the Graduate Center, City University of New York and a Visiting Professor for the Curatorial Workshop at the School of Visual Art. Notable curatorial projects include the traveling exhibition EN MAS’: Carnival and Performance Art of the Caribbean (2015-2018), Tide by Side, Faena Forum, Miami Beach (2016), and etcetera: a civic ritual, Printemps de Septembre, Toulouse (2017). Based in Paris, Tancons has curated for numerous biennials including those in Bénin (2012), Gothenburg (2013), and Sharjah (2017-19).

In the Interim: Ritual Ground for a Future Black Archive is guest curated by Claire Tancons. Lead support for this exhibition is provided by the Raynier Institute & Foundation through the Frye Art Museum | Artist Trust Consortium. Additional generous support is provided by the Frye Foundation and Frye Members.