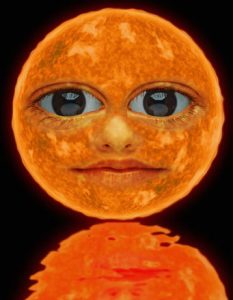 While the exhibition Agnieszka Polska: Love Bite is currently suspended due to the Museum’s closure, we invite you to view selected video works from the exhibition online.

Agnieszka Polska creates hallucinatory computer-generated media works that operate at the intersection of language, history, and scientific theory to illuminate issues of individual and social responsibility. Combining original poetic texts with digitally manipulated imagery, her video works attempt to describe the overwhelming ethical ambiguities of our time. Polska’s exhibition at the Frye presents the US debut of two video installations that address, in deeply affecting audio-visual essays, the urgent global issue of climate change and the specter of mass extinction.

The first installation comprises two videos entitled The New Sun and What the Sun Has Seen (both 2017) that function as a looping diptych, depicting a child-like sun with huge melancholic eyes that is witness to environmental and ethical collapse on Earth. In the videos, the sun speaks directly to the audience in half-sung monologues, moving through a range of emotional states and modes of address, from professing love and telling silly jokes, to pondering the power of language to construct a new world order. Certain passages refer to the effect in quantum mechanics in which the observer influences the event observed through the act of interpreting it, collapsing a dynamic, indeterminate system into one definite state. The sun character is seen in this light to be both helpless witness to and cause of the transformation it beholds, while suggesting, conversely, that a horizon of possibility remains for humankind to re-write its own destiny.

Poetic meditation on scientific phenomena also underlies the second installation, entitled The Happiest Thought (2019) after the idea that inspired Albert Einstein to write his Theory of General Relativity. Extending from Einstein’s notion that space-time is relative to the perspective of the observer, Polska’s immersive video revisits a prehistoric environment that might echo our own: Earth’s biosphere prior to the Permian-Triassic extinction event, which occurred more than 250 million years ago and annihilated as much as ninety percent of life on the planet. The piece offers a hypnotic exploration of lush and alluring ancient environs while contemplating humanity’s potential to overcome enormous threats like the current climate crisis.

Polska’s videos incorporate visceral stimuli like ASMR (Autonomous Sensory Meridian Response) triggers and emotional mimicry to craft a mesmerizing atmosphere that can compete with what she calls the “environment of seduction” surrounding consumer marketing and organized religion. By doing so, the artist aims to create “a common territory of exchange, a territory for involvement in ritual” in which we can confront our collective calamity.

Agnieszka Polska (Polish, b. 1985, Lublin, Poland) lives and works in Krakow and Berlin. Polska has presented her works at international venues including the New Museum and MoMA in New York; Centre Pompidou and Palais de Tokyo in Paris; Tate Modern in London; Hirshhorn Museum in Washington, DC; and Hamburger Bahnhof, Berlin. She also took part in the 57th Venice Biennale, 11th Gwangju Biennale, 19th Biennale of Sydney, and 13th Istanbul Biennial. In 2018 she was awarded German Preis der Nationalgalerie.