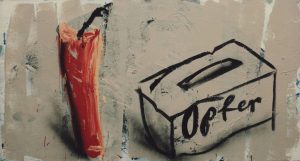 The Museum Frieder Burda is mounting a major thematic exhibition on the motif of the candle. Gerhard Richter’s Kerze (Candle) (1982) has become a veritable icon of painting and is one of the most important pictures in the Frieder Burda Collection. The attraction this fascinating work exerts—the US band Sonic Youth used it for the cover of their 1988 albumDaydream Nation—is the starting point of this show exploring the pictorial motif of the candle and its range of meanings.

In addition to these pictorial approaches, the exhibition also examines the role the candle has played in cinema. A film compilation presenting “candle moments” from the history of film focuses on formal and thematic criteria as well as on the differences and tensions between pictures and films.