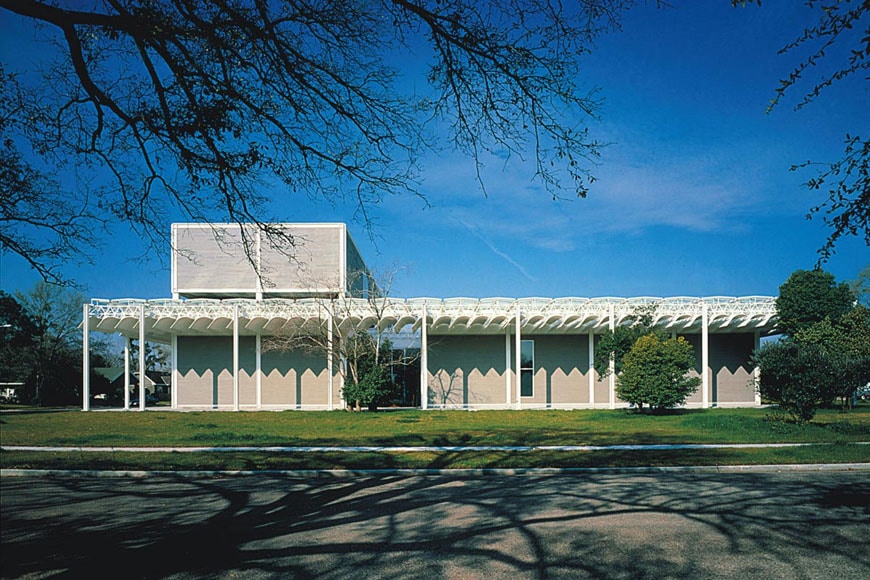 The Foundation was created in the 1960s in the Houston area by John and Dominique de Menil who ran the museum until the death of Dominique de Menil in December 1997. The Menils’ combined wealth and love of art led them inevitably to want to create a place where people could come together and enjoy all that art had given them.

The Foundation started life in bungalow-style homes, with each painted the same shade of grey to establish commonality. In 2013, Michael Van Valkenburgh, a landscape architect, was appointed to enhance and expand the 30-acre campus. The Foundation’s diverse collection includes some 17,000 paintings, sculptures, prints, drawings, photographs, and rare books. Its stated aim is to promote understanding and culture, primarily through the arts.

Artworks range from early to mid-twentieth century works by artists such as Yves Tanguy, Rene Magritte, Man Ray, Marcel Duchamp, Henri Matisse, and Pablo Picasso, as well as an extensive collection of pop and contemporary art from Jackson Pollock, Andy Warhol, Mark Rothko, Robert Rauschenberg, Vija Celmins and Cy Twombly among others. The full extent of the collection’s diversity is demonstrated by the Foundation’s permanent collection of Byzantine, Medieval and Tribal art.

The installation’s fluorescent light tubes radiate an environment and atmosphere which has been likened to both ‘carnival and cathedral’ by the Boston Globe. The Menil Foundation includes two additional buildings:

South of the entrance is a reflecting pool installed in the memory of Martin Luther King which contains a distinctive sculpture by Barnett Newman.

The Menil Collection is a museum and neighborhood of art spanning 30 acres in the heart of Houston, Texas. The main gallery building anchors the campus and is surrounded by four additional museum buildings: the Menil Drawing Institute; Cy Twombly Gallery; Richmond Hall, which features an installation by artist Dan Flavin; and the Byzantine Fresco Chapel. Making art accessible is vital to the Menil’s mission; no admission is charged and public programs are free. All of the Menil’s campus buildings are entered at ground level, symbolic of its democratic ideals. The Menil’s philosophy is to foster each visitor’s direct, personal encounter with works in the collection. The display of carefully chosen artworks in serene settings are hallmarks of the museum. The museum’s public programs aim to attract, educate, and inspire diverse audiences and are vital to the life of the Menil. Exhibiting artists lecture and perform; curators and scholars explore exhibitions, collections, and artworks; music, dance, and poetry performances are held, and all are organized to foster conversation. The Menil is also marked by the activism and spiritual pursuits of John and Dominique de Menil. It is a museum engaged with art for life’s sake, including the witnessing of civil rights photography, the overt spirituality of Byzantine icons, and the contemplative act of viewing abstract painting. The museum and the campus aim to be an oasis in the midst of daily life that offers each viewer a moment to pause, reflect, and reinvigorate. The museum’s collection—displayed in two-thirds of the main building and often rotated—is built around several types of art loved and collected from the 1940s to the 1990s by the Menil Collection’s founders, John and Dominique de Menil. The permanent collection highlights Arts of Africa, the Americas and Pacific Northwest, Ancient World, the Pacific Islands, Drawing, Medieval and Byzantine, Modern and Contemporary, Surrealism, and the permanent installation entitled Witnesses. The Menil Collection does not aspire to be comprehensive. It strives instead for excellence in the distinct areas established by its founders and successive curators and directors. A rigorous intellectual independence and a commitment to humane values are key criteria for program choices the museum makes. Since its founding, the Menil Collection has supported substantial collaborations with contemporary artists who have used the collection as a jumping-off point for new work. Scholarship is at the heart of the Menil enterprise. A conservation studio and a research library symbolically flank the public exhibition spaces, and the de Menils themselves commissioned several major research efforts. The conservation department is known for its studies of modern art materials and techniques and helps train conservators.