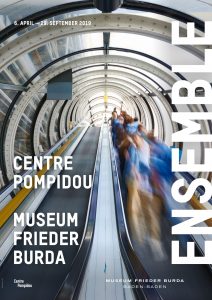 To mark the 15th anniversary of its inauguration, Museum Frieder Burda presents a unique exhibition project: Ensemble. As an art collector, Frieder Burda has long enjoyed friendly ties to Centre Pompidou, where he was the first and, so far, only German member of the purchasing commission. These close links with France, and especially Paris, were not just central to Burda’s personal biography and his development as a collector. The devastating effects of National Socialism and World War II, along with the post-war reconciliation between Germany and France, also had a deep influence on European art history and contemporary history in the 20th century, as Ensemble brilliantly reflects.

Curated by Brigitte Léal, the deputy director of Centre Pompidou, and featuring high-caliber loans from Paris, Ensemble initiates an interaction between the two museums’ collections and generates a complex dialogue between German and French positions. Works by German expressionist masters, such as August Macke, who was killed in the Champagne region in 1914, meet works by the fathers of French modernism: Pierre Bonnard‘s late and highly vulnerable Portrait of the Artist in the Bathroom Mirror (1939-45) or Pablo Picasso’s Le Rocking Chair (1943) speak of desperation and isolation during the German occupation. In Marc Chagall‘s painting Le Dimanche (On Sundays) (1952-1954), poetry and spirituality combine in a manner that made his work incredibly popular in post-war Germany. At the same time, the work features echoes of a Jewish culture in Europe that has been lost forever.

Georg Baselitz, Sigmar Polke and Gerhard Richter are central to the Frieder Burda Collection. Like Anselm Kiefer did years later, they adopted a critical approach not just to German history but also to media culture and remembrance culture – in the process, laying the foundation stone for the immense international popularity of German painting. Centre Pompidou is making spectacular works of art by these iconic artists available for Ensemble – such as Kiefer‘s gigantic painting, The Secret Life of Plants (2001-2002) and Baselitz’ notorious early work Ralf III (1965).

Another special highlight is a section dedicated to German immigrants, who helped make Paris a center of modern photography in the 1920s and 1930s. These include the Dadaist and fashion photographer, Erwin Blumfeld, or the likes of Marianne Breslauer and Germaine Krull, who made a major contribution to the Bauhaus-influenced “Neues Sehen” (New Vision). Ensemble brings together their works with Andreas Gursky‘s photographs of Paris in 2003, in which he impressively pays tribute to this avant-garde of photography.