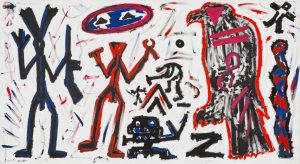 This important survey of work by the artist A.R. Penck is the first large-scale exhibition in the world after A.R. Penck passed away in May this year, and the artist’s first major exhibition in Asia. The exhibition is supported by Michael Werner Gallery, New York, London and Märkisch Wilmersdorf.

A.R. Penck (1939–2017), born Ralf Winkler in Dresden, Germany, is one of the greatest contemporary artists of the 20th century. A.R. Penck was committed to creating a new language for society through his painting and sculpture. By utilizing a unique vocabulary of signs and symbols, he sought to express the psychological structure of mankind. His work is a unique and nuanced language: what may seem simple and composed of primitive pictographs has a strong sensitivity and depth of thought. An avid reader, A.R. Penck studied cybernetics to explore how people transmit and understand information and ideas. Throughout his career, his prolific output appears to follow an underlying system, as if metaphorically and silently pointing into the future.

The question “Will Sign Become Reality?” is the theme of this exhibition. His novel concepts and images offer a new way of understanding that makes his work so relevant today. He said, “Everything is paradox and schizophrenic, flat and magnificent, extremely reactionary and very progressive, decadent and fascistic. And so am I! And so are you!” In addition to the visual arts, A.R. Penck was a writer and a jazz drummer with several publications to his name.

A.R. Penck’s symbolic systems are closely related to the common historical context of human existence. At the age of six, A.R. Penck witnessed the bombing of his hometown Dresden. These wartime experiences, followed by a turbulent post World War II period, are some of the driving forces behind Penck’s creations.

Since the early 1980s his exceptional work brought him international success, and his oeuvre has been exhibited several times at the famous documenta in Kassel, the Venice Biennale and many other major institutions worldwide.

A.R. Penck: Will Sign Become Reality? reviews the artist’s development over several decades, exploring his artistic diversity. On display are works from his early pictorial and formal explorations, to his research and development of symbolic systems, to his later, critical investigations of social topics. Featuring a large selection of paintings, bronze sculptures, Standart-Modells, studies and works on paper, the exhibition will give Chinese audiences a chance to appreciate his mastery.