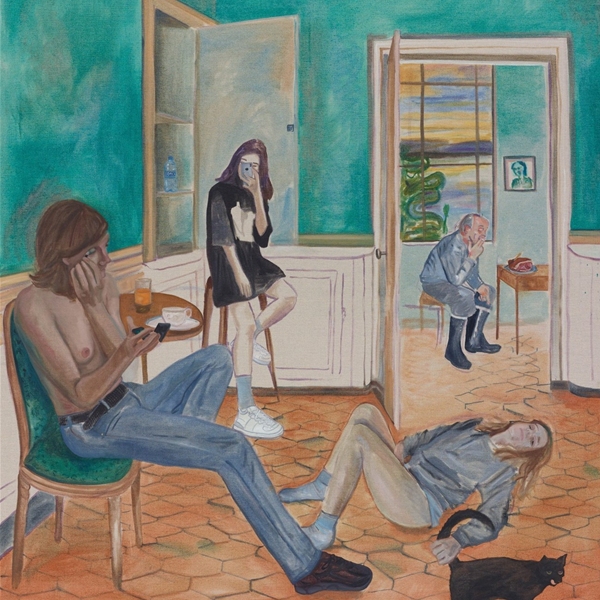 The group exhibition Stretching the Body brings together a group of international women artists who reflect on the genre of the portrait and the theme of the human figure through the medium of painting. Distancing themselves from the canon of the representation of the female body in the Western pictorial tradition, the artists in the exhibition, through a variety of stylistic strategies, bring into play themes such as race, gender identity, power relations, memory and knowledge that pass through bodily experience.
Whether elongated or deformed, abstract or geometrically constructed, the body is at the center of artistic investigation and formal experimentation, and emerges as a contested space of conflict between definitions and belonging, in which the limits between subject and object are
continuously called into question.

The condition of women, the oblivion of certain figures within history and the political function of images are some of the themes at the center of the research of Giulia Andreani (Italy, 1985), whose works offer themselves to the eye as remote yet current reminiscences. Louise Bonnet (Switzerland, 1970) is known for creating human figures with exaggerated, grotesque and out-of-scale features. The bodies of her characters appear stretched, and seem to reflect a disturbing discomfort, a restless psychological state that makes their limbs contort.
their limbs. Jaclyn Conley (Canada) produces contemporary versions of historical painting, portraying figures of ordinary subjects at a monumental scale. Inspired by iconic images from art history and photography, Conley reflects on the human experience and the notion of social progress.

Life and biographical experiences are central to the production of Celeste Dupuy Spencer (Brooklyn, 1979), who paints by combining photographic images, memory, and imagination, creating a microcosm in which personal and collective histories are intertwined. The research of Jana Euler (Friedberg, 1982) focuses on the relationships between subjects and the surrounding space, understood in the physical, social and institutional sense, and investigates how their identity is closely influenced and shaped by the context. His works, which appear at once grotesque, imaginative and hyper-realist, produce a heterogeneous universe of continuous connections.
The pictorial style of Mernet Larsen (Houghton, 1940) is characterized by a predilection for geometric lines both in the construction of the subjects, which she calls characters, and of the spaces, characterized by a complex perspective construct, the result of multiple influences including Russian Constructivism, Oriental and Renaissance art.

The construction of identity is the most frequent subject in the production of Wangari Mathenge (Kenya, 1973). The desire to reappropriate the representation of the contemporary Afro-descendant condition, frequently linked to the concept of migration and diaspora, leads the artist to infuse her subjects with dignity, humanity and a desire for redemption. The paintings of Jill Mulleady (Uruguay, 1980) mix the registers of beauty and horror, of quiet and violence, through phantasmal scenes, full of allegorical references and populated by figures and bodies rendered in macabre tones. Christina Quarles (Chicago, 1985) pictorial practice aims to demolish a fixed and defined conception of body and identity, showing them as multiple and fragmented. Recurring subjects in her paintings are bodies, often unfinished and delimited by silhouettes, represented in a liminal state between gender and race, thus referring to the condition of disorientation and queerness to which the artist feels she belongs. The relationship between technology and painting is at the center of the practice of Avery Singer (New York,
1987). Digital and analogue are united in the artist’s methodology, both in terms of style and content, to give life to works where the grid and geometrically constructed subjects interact with references to the historical avant-garde and topoi of artistic and literary culture. Through multiple sources and the union of different genres, such as portrait, still life and landscape, the paintings of Anj Smith (Kent, 1978) deal with personal and existential themes, in which the contemporary human condition is investigated through fears, drives and the finitude that characterizes it. The practice of Ambera Wellmann (Lunenburg, 1982) is focused on the representation of desire and female bodies, seen as a subject and not as a product of male authorship. Fundamental to her work is the study and appropriation of the nude in art history, now shown from a feminist and non-heteronormative perspective. Rose Wylie (Kent, 1934) creates paintings with a strong textural aspect in which sparse and quick brushstrokes are combined with the practice of collage. Stylized but at the same time iconic elements, often ironic and provocative, are the result of a process of appropriation of different sources, giving life to works whose style recalls childish drawing and outsider art.